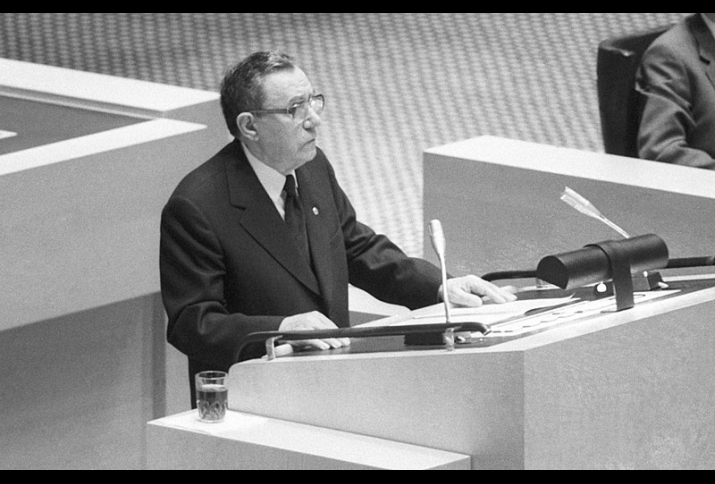 The following comments draw from the authors Eric D. Weitz´s upcoming book : A World Divided: The Global Struggle for Human Rights in the Age of the Nation-State (Princeton: Princeton University Press, forthcoming 2019).

Most people think that the international human rights system is a liberal creation fostered by the United States and its allies. There are good grounds for such views. In the late 1940s, Eleanor Roosevelt and René Cassin co-chaired the United Nations committee that drafted the Universal Declaration of Human Rights (UDHR), while the Soviet Union and its allies abstained on the final vote. The European Convention on Human Rights remains, to this day, the strongest regional pronouncement and the European Union, despite all its problems, the strongest regional enforcer of human rights. US President Jimmy Carter famously declared in the 1970s that human rights would govern the country's foreign policy.

All through the 1940s, 1950s, and 1960s, UN committees negotiated the language of the two covenants that, in 1966, finally brought into international law the principles laid out in the UDHR. The drafters had imagined that the covenants and an international court would follow quickly on the heels of the UDHR. Instead, the Cold War assured that they would have to wait twenty years for the covenants and half a century until the International Criminal Court came to life. In these long, wearying negotiations, the US and many of its allies proved not to be great advocates of human rights. Instead, they fought resolutely against two provisions that would become bedrocks of the international human rights system: self-determination and social and economic rights. In the still-colonial world of the 1950s, Britain, France, Portugal, Belgium, and many others feared that the concept of self-determination would undermine their empires. Rightfully so. For the US especially, any mention of social and economic rights smacked of socialism and communism. The US would only countenance political rights as articulated in the French, American, and Latin American revolutions of the eighteenth and nineteenth centuries, and agreed to the social rights provisions of the UDHR only with great reluctance.

In contrast, the Soviet Union allied with countries from what we now call the Global South to create a much more expansive human rights system.[1] The question immediately arises:  How can we even talk about human rights in a system that, under Stalin, was bloodily repressive, that killed, tortured, and deported millions of its own citizens? That allowed over six million of them to starve to death in 1932 during the collectivization of agriculture campaign? That continued to be highly authoritarian under Stalin's successors? Yes, we can talk, in one and the same breath, about rights in the Soviet Union while also recognizing the deeply repressive and murderous character of the system. No country has a pristine record on human rights, and certainly not the USSR. Soviet history does, though, add many new angles and panes to the multistoried, fragile glass house of human rights.

Communists, including Stalin and his successors, Nikita Khrushchev and Leonid Brezhnev, were steeped in the long ideological tradition of socialism and communism. They believed that their movement would finally complete the rights revolution begun by the French in 1789. They also viewed nation-states under capitalism and national republics in the Soviet Union as essential steps toward the communist future. After all, Marx and Engels in the 1860s and 1870s and the socialist Second International in 1896 had expressed their support for the self-determination of nations. The USSR followed suit, and it was not mere hypocrisy.[2]

As early as 1947, at nothing less than the UN debate on Palestine, Andrei Gromyko, the Soviet ambassador to the UN and later foreign minister (and many other things besides), gave an acute and moving speech in support of the foundation of a Jewish state. Before the UN, Gromyko spoke with great sympathy about the “indescribable” Jewish suffering and “almost complete physical annihilation” of Jews under the Nazis.[3] Gromyko went on to lament the sorrowful state of Jewish survivors, many of them homeless or living in displaced persons camps, all of them impoverished. If the UN ignores their plight, he argued, it would violate “the high principles proclaimed in [the UN] Charter, which provide for the defense of human rights, irrespective of race, religion, or sex. The time has come to help these people, not by words, but by deeds.”[4] Gromyko used the desperate situation of Jews to attack the western powers, who had utterly failed the Jews, he charged. None had been able to protect them from Nazi violence, none had helped Jews defend their rights. Hence, the Jews aspire to their own state, and the UN should not deny them this right. Gromyko went on to call for a single state in which the rights of both peoples, Arabs and Jews, would be protected. If that proved impossible, then the Soviet Union would support partition.[5]

The USSR's position in favor of a Jewish state should not be reduced to an early campaign in the vitriolic competition of the Cold War. Gromyko's recognition of the Holocaust - as it would later be called - and the necessity of a Jewish state were not one-show wonders, singular and temporary exceptions to the overall thrust of Soviet foreign policy. Rather, they had deep roots in the ideology and politics of the USSR. The path to communism lay through the nation, whether nation-states under capitalism or national republics within the USSR. For the countries of the Global South, the Soviet position in support of independent, sovereign nation-states rang like music in their ears - even if they rejected the end-goal of communism. In 1951, the Uruguayan representative to the General Assembly stated the point most simply and clearly, and in a way that would be repeated through all the debates from the 1940s into the 1960s: “any limitation of … the right [of self-determination] would deprive the other rights of reality.”[6]

The Soviet Union and the 1966 human rights covenants

In 1966, “after two decades of laborious, indeed epic endeavor,” as the delegate from the Dominican Republic phrased it, the UN took up the two covenants, one on civil and political rights and the other on economic, social, and cultural rights, plus an additional resolution in support of self-determination.[7] The half-baked compromise of two covenants pleased almost no one but reflected the ideological and political stalemate of the Cold War. To the Soviet bloc and Global South representatives, political and civil rights were meaningless if people did not have adequate food and clothing, shelter, means of employment, and healthcare.[8] The United States and its allies ferociously resisted the articulation of these issues as rights, while the colonial die-hards, Portugal and Britain, were about the only ones to oppose publicly the rhetoric of self-determination.

The rapporteur of the UN's Third Committee, Ponce de Leon of Columbia, expressed the prevailing sentiment of two decades of debate: “The right of self-determination is one of the most important human rights, since it is a prerequisite for the full enjoyment of other fundamental freedoms and rights…  [including] the equal rights of women and men in all fields of human rights… With the adoption of these instruments [the two covenants] every imaginable aspect of the life of the individual is covered.”[9] The passing of the two covenants in 1966 represented a landmark in the development of the international human rights system. The promise of 1948 and the UDHR had, it seemed, been fulfilled. A great deal of the credit rests on the countries of the Soviet bloc and the Global South. The United States, in contrast, has still not ratified the covenant on economic, social, and cultural rights. On the international plane, then, the USSR became a firm advocate of human rights, especially in regard to decolonization, self-determination, social rights, and women's rights. Strange but true:  a country that on its home turf was deeply repressive, that denied large segments of its populace basic rights and at times murdered and terrorized its own citizens on a vast scale, this same country promoted human rights at the international level.

The human rights movement in the Soviet Union

There is something curious, though, about human rights. Once pronounced, the genie's bottle is open. The escaping scents cannot be easily recaptured, the bottle resealed. Haitian slaves took up the cry of the French Revolution as they fought for their own liberation and influenced, in turn, Brazilian slave rebels. After their defeat, American Indians began demanding the rights that other Americans possessed. Pioneering feminists all around the world rallied around the idea that women, too, deserved rights. In many instances protesters and activists called not for revolution, but for adherence to existing laws and principles. They demanded that the political order make real the rights promises written into cherished founding documents like constitutions and declarations of independence.

So it was in the Soviet Union. When a human rights movement emerged in the mid-1960s, its members - in its origins overwhelmingly from the intelligentsia - called not for the overthrow of the Soviet Union, but for the fulfillment of Soviet law.[10] The language of rights, proclaimed with such flourish in the 1936 constitution and its successor in 1977, served as the weapon hurled by dissidents as they called on the Soviet government to respect freedom of speech and assembly and the right to emigrate (among other rights). Khrushchev and other Soviet leaders had helped uncork the bottle. The vocabulary of human rights entered Soviet discourse even though the USSR had abstained in 1948 on the vote on the UDHR. Khrushchev used the phrase “human rights” in his address to the General Assembly in 1960, as had Gromyko before him in 1948 (as we have just seen). The USSR and its Soviet bloc allies retained their seats on the UN's Commission on Human Rights, a powerful perch from which they influenced international proclamations and treaties. By the late 1950s, the Soviet Union was speaking and acting as if it had actually signed the UDHR.[11]

Activists demanded a halt to the extra-judicial, inhumane repressions of individuals who had dared to speak out, many of whom languished in prisons, psychiatric hospitals, and labor camps. Soon enough, activists would also draw upon the Universal Declaration of Human Rights, thereby internationalizing their movement. In turn, foreign support for these Soviet dissidents helped create the modern human rights movement, Amnesty International and Human Rights Watch two prominent examples. National and social rights within the country, the USSR as a major actor in the creation of the postwar human rights system, and the emergence of a domestic dissident and human rights movement from the 1960s onward - these topics make the Soviet experience critical to any history of human rights.