When the foundation pit is just a pit 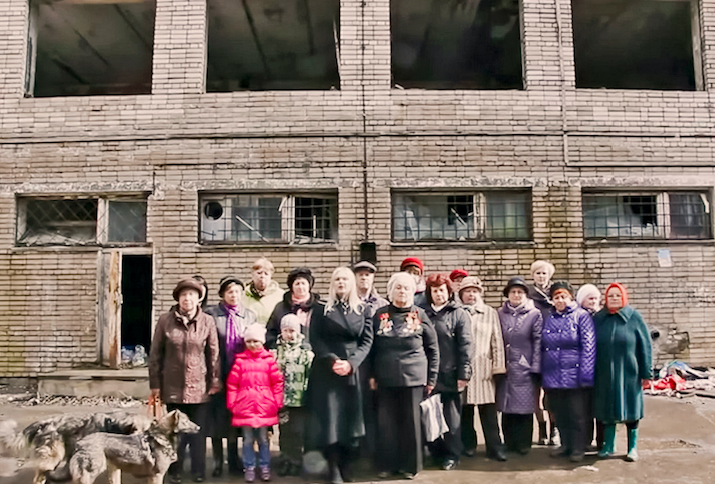 Symbolically and physically, the fact of the foundation pit haunts Platonov's eponymous 1930s Russian-language novel. Set in a spatial abstraction of Stalin's Soviet Union, the novel questions the future of the socialist utopia, setting the project of building the future against its cost. Platonov depicts the lives rendered meaningless in the process, at times to the point of brutal sacrifice. Humans are reduced to work and instrumentalised for a future out of sight. The builders do not move past the hole they are digging, which is meant to support a housing complex. Eventually, they plan to enlarge it. The pit swallows everything. The structure it means to hold is never produced. Book cover of Andrey Platonov´s The Foundation Pit, published by the New York Review of Books in April 2009.

Andrey Gryazev's film Kotlovan takes inspiration from Platonov. Premiering at the 70th Berlinale, Kotlovan is a documentative collage of news footage and YouTube videos. The film begins with a compilation of televised reports on foundation pit mishaps: the foundation pits are left unattended, they fill with water, people drown, the pits begin to collapse. It transitions to Russian citizens' appeals to Putin to address their problems. Initially, people complain about the foundation pits. Then other problems surface. Pensioners and workers appeal for living wages, the sick for better care, mothers for the return of imprisoned children, families for forced eviction to be reversed. Whole villages appeal for infrastructure and energy. A mass protest appeals against the building of a landfill in the Arkhangelsk region of Shiyes, where the waste from Moscow will be deposited at the expense of health risks and environmental damage in the area. Gryazev steadily blends these appeals as they move from theme to theme. He uses exclusively found footage, the majority of which is sourced from YouTube. Sometimes, the appeals are simply screams or sentences that contain more swearing than not — here, it's unclear what exactly should be changed, solely the desperation becomes evident. Other appeals are graceful. Some plead and kneel, some recite poems, some are read by children, some seem to be hopeful for change. No singular figure stands out completely, even when the video comes from an individual. Rather, the voices merge into a choir of despair, an emotional and collective exhaustion.

Like Platonov's novel, the film motions from humour to despondence. Initially, the film is mainly humorous. The audience erupts in laughter to one of the first scenes, a crane tumbling into a foundation pit, with the shoeless and shirtless driver jumping out just in time. In fact, not seldom is the audience moved to laughter. Is this a humour felt by those in the videos as well? Was it intentional to be funny at times? During the discussion following the film, Gryazev answers that physiologically: laughter and crying are in fact very similar for the body. They are both forms of release, and sometimes it's difficult to understand which release is occurring. And it's true. The winding combinations of swearing, the writing of poems, the elaborately rehearsed performances for the videos, the attempts to deeply insult Putin himself: the absurdity and darkness of the situation is so totalising, it almost seems funny. At first. But grief also creeps in. One clip shows a woman with a bruised face asking for her abusive husband to be imprisoned. The police are doing nothing to help, she explains. I wanted to cry. Gryazev lives in Russia and comes from a background in professional figure skating. His films are not funded or shown within the country, he earns his money as a figure skating trainer. His films are produced independently and only screened abroad. While this appears as a limitation, he simultaneously seems positive about his capacities. In the end, his only censor is himself, and he can decide what appears in the films he produces. During the Q&A, he states that he does not intend to convey a particular emotion, but rather emotion itself. If the initial purpose behind the videos he used in Kotlovan was circulation, he contributes to the process by collecting them and giving them an audience. While he initially worked with almost a hundred hours of footage, the end result was cut to 70 minutes. Most of the original videos themselves are no longer available online. Although he was unable to give a precise number, Gryazev estimates that the general disposition and the condition of poverty found in these appeals represents 75-80% of the Russian population.

The intention of the film, as stated by Gryazev, is to give the videos a larger audience, and in some sense, this is surely achieved: even on a Wednesday afternoon, the theatre is full. Yet to what extent is this more successful than the individual YouTube videos were before? Some of the original clips received hundreds of thousands of views. Will the film be watched widely beyond the festival? Let alone the general discomfort of helplessness the audience has to endure. People face the camera, look at you, desperately asking for help. In the theater's seat, you feel responsible to assist while knowing you cannot. When you spontaneously laugh at a clip, you wonder whether you should be laughing. When you feel sad, you wonder to what end. It remains unclear which audience Kotlovan was designed for exactly. Possibly, it is one meant to take up a political stance, or perhaps it means to unite Russian viewers in a feeling of solidarity. Does the film aim at international awareness, or is it just a record of its time? You remain, hoping someone will eventually see this and answer. When asked about hope for the future, Gryazev avoids a specific response. Rather, the director returns to the alluded novel, speaking of the foundation pit as a metaphor for a useless and needless process of building. In Platonov's novel, the workers work without a goal. They continue to expand the foundation pit, but the building is not built, the future is unclear, people are depersonalised, some die. In the film, even the work at this point seems to have stopped. Now, we are left with only the foundation pit. The foundation itself is empty and erased from its function. The foundation pit is just a pit. Sometimes, though, it is also a grave.