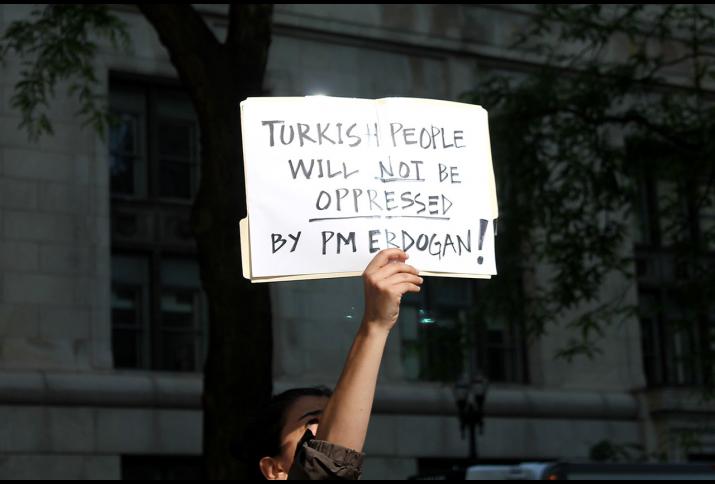 ZOL: It must have been a difficult situation for you, especially after the referendum and the following mass layoffs of academics and intellectuals. What kind of reactions did you receive after the interview with the Deutschlandfunk after criticising the political changes and considering the vote as illegitimate?

NM: Actually, none! I do not think that I was saying something exceptional, many observers of the politics in Turkey were also giving similar comments.

ZOL: Aren’t you afraid that your political position could have some negative effects for yourself and for your academic career?

NM: Absolutely, and that is exactly why I am now here in Berlin and not in Turkey. But honestly, I was very tired of auto-censorship in the past few years. It makes you feel very bad not to voice your genuine ideas and feelings publicly and consciously censor them, on your own. That's a terrible thing. And when I came here, I said I will not do that again.

ZOL: Will it be possible for you to continue to travel to Turkey?

NM: There is no obstacle that I know of. I have a valid passport and I am a citizen of the country. But we are not sure of anything in this state of emergency...

ZOL: How would you describe your relationship to other Turkish academics after the referendum?

NM: As usual. I have a close circle of academic friends. We understand each other very well and we support each other.

ZOL: Do you have any contacts to academics who voted „evet“?

NM: No. Turkey in political terms is quite divided. Of course, you never know who votes what in that little room. But I do not think I have anyone around me who voted 'evet'.

ZOL: Since many academics left Turkey before and after the referendum, are there any networks of scientific communities abroad? And how do they participate in the current debate?

NM: Yes, in almost every country, people come together, discuss developments, build networks. People try to find ways of supporting friends in Turkey, or those who want to leave the country. Turkey is always a part of the debate, many academics write or speak about the developments, inform the public in their host countries, etc.

ZOL: One of your research topics is about the Armenian genocide. After the putsch in July 2016 you were forced not to use the word „genocide“ in your work, which you refused to do. What does that kind of political influence mean for a critical historiography?

NM: The word has always been difficult to use. It was not only after 2016 that I was criticized. The biggest obstacle for my academic career was to pass the Doçentlik exam (to become a docent you need to take an oral exam, with 5 professors, selected by the Board of Higher Education [YÖK]). I had to take the test 3 times due to discussions over the genocide. The idea is to silence and scare a candidate and make him/her not ever take the exam again. But I decided to try it as much as it takes. I went to my second oral exam when I was 8 months pregnant. When I went to the third one, I had a 2 month old baby. Probably because of this resistance (or that they were tired of me coming in front of them every six months), they gave me my Doçentlik. But the pressure and humiliation they try to impose on you is not for everyone. Many people give up pursuing the title after their first. But I am the great-granddaughter of a survivor, who resisted perishing in a cruel world. Unintelligent questions of quasi-academics could not make me step back.
Critical historiography, especially regarding the Armenian genocide, is a rare thing in Turkey. Still, there are a dozen of very good academics, but most of them lost their jobs or were forced to leave the country.

ZOL: During the interview with the DLF you mentioned that there are many learned journals in Turkey that offer resistance and still publish critical comments. Therefore, in your opinion, how could Turkish Academics be supported by the European scientific community?

NM: Well, first of all, material concerns, definitely. Funding opportunities are important and more of it would be more helpful. As a less tangible wish, I would say less of a 'victim discourse'. We have become sort of exiles, that's true, but we are not helpless, vulnerable, weak, etc. So what we need is a more empowering discourse.