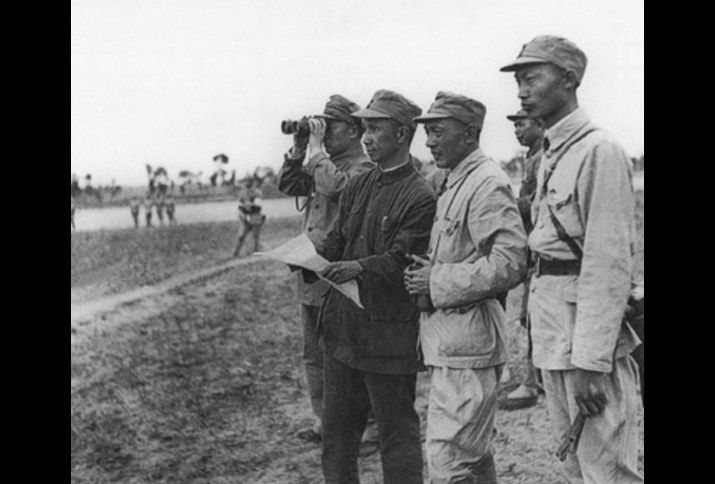 Foto: Su Yu (粟裕), the 2nd from the left, was investigating the front field before the Menglianggu Campaign started. This picture was taken at 1947, the copyright has expired. Quelle: Wikimedia Commons. Lizenz: Public Domain.

On 31 December 1944, Spokesman-Review, an influential Washington area daily newspaper, enthusiastically introduced to its readers former lawyer Benjamin H. Kizer, a Spokane native who had recently been appointed chief of the China Office of the United Nations Relief and Rehabilitation Administration (UNRRA). China was the recipient of UNRRA’s largest distribution of aid by value to any single country – US$ 535 million. At the same time, over 1,000 international relief experts and administrators came to China in a relatively short historical period from 1944 to 1947. Kizer would shoulder an enormous task of organization and administration, and did so with no experience in dealing with Chinese affairs. The newspaper article then described how this idealistic American internationalist, for nothing other than humanitarian reasons, cut all ties of his present life and prepared to help Chinese recover from the Second Sino-Japanese War (1937-1945).[1]

UNRRA (1943-1947) was an international organization that coordinated relief for victims of the Second World War in areas liberated from Axis control. Existing historical scholarship has put an unbalanced emphasis on global post-war reconstruction: European experiences have attracted much attention whereas scholars pay little attention to non-Western cases, with a few exceptions such as Japan.[2] For long, not only in Western media, but also in Chinese historical scholarship, China has been either regarded as a passive recipient of international humanitarianism, or has simply been overlooked. But looking at UNRRA in China provides us with an opportunity to investigate how non-Western actors and motivations could shape a transnational humanitarian project, in a way different from European cases.

Jiang, an American-Educated Chinese in UNRRA

When UNRRA was formally established in November 1943, China was one of the so-called ‘four policemen’ in President Roosevelt’s plan for a post-war international order. China was the only independent non-Western power in a four-power Central Committee of UNRRA, alongside the United States, Great Britain, and the Soviet Union. As many historians have illustrated, the war against Japan greatly enhanced China’s international status.[3] Only two decades earlier the Paris Peace Conference of 1919 witnessed China’s diplomatic failure: German concession in China was transferred to Japan in spite of China’s strong protest. This ‘failure’ subsequently led to a domestic organized protest of national scale – what has been known as the May Fourth Movement – against imperial power.

Today, the PRC Government has set 4 May each year as a national holiday for ‘youth’. It is easy to see how ‘humiliation’ has played a part in building up national memories even till today. For those who had been frustrated in their student life by China’s unpleasant experience in the interwar years, the aim to re-position China in the global order was deeply rooted in their mind. Jiang Tingfu (or Tsiang T. F.), the representative of the Nationalist Government in UNRRA, was one of them. As an American-educated scholar who learned lessons from America’s interwar isolationism, Jiang believed that the only opportunity for China lay in active participation in international society.[4] In UNRRA, Jiang was elected as the chairman of the Far Eastern regional committee. He worked not only for his country, but also to improve further internationalism – more specifically, to facilitate post-war regional, at least economic, cooperation through UNRRA. If American designers and relief workers in the 1940s, such as Kizer, have been perceived as ‘super-idealists’, Chinese internationalists like Jiang also took part in shaping this UNRRA’s ‘international fantasies’.[5]

Still, Jiang’s activities in UNRRA should not blind us the fact that China was a weak nation. The Nationalist Government lost control of more than half of its pre-war territory, including the eastern ports where most tariff revenue was generated.[6] The Nationalist military’s scorched earth tactics not only ruined urban and rural infrastructure and productivity, but also brought starvation and death to millions of people, particularly after the breaching of the Yellow River dikes and the subsequent Great Henan Famine of 1942-1943.[7] Post-war relief and rehabilitation might be an opportunity, but meanwhile also a burden that the Nationalist Government would like to share with its powerful allies. Such pragmatic reasons also partly explain the request of the Chinese Communist Party for UNRRA aid in 1946 to people under its control in North China. UNRRA was one important solution for both competing powers in China to relieve the post-war burden of relief and rehabilitation.

In winter 1943, the war in Europe seemingly would end soon, while the Asia-Pacific battlefield did not appear to offer any such prospects. For China, active participation in UNRRA also meant internationalizing the suffering of millions of Chinese. Amongst Nationalist China’s war efforts, the internationalization of the Second Sino-Japanese War was a consistent and important policy to win international sympathy and actual support. Using the language of liberty and internationalism in a Western-favoured way, Nationalist diplomats like Jiang were willing to show the West professionalization, sometimes westernization, of their government.

Rather than simply receiving the UNRRA aid, Nationalist leaders strove to incorporate this international aid into its own scheme of state-building. In January 1945, the Nationalist Government established a parallel state agency, the China National Relief and Rehabilitation Administration (CNRRA), to coordinate relief and rehabilitation amongst all government and non-state agencies including the UNRRA China Office. Seemingly endless fights against Japan’s aggression were only one of tough difficulties during the years of reconstruction. As historian Rana Mitter has pointed out, China was not only a ‘post-war’ society, like France or Poland, but also a ‘post-colonial’ society in a way that Europe’s liberated countries were not.[8] China therefore had to face the growth of anti-imperial nationalism, and challenges from the Chinese Civil War (1946-1949) between the Nationalist and Communist armies.

In spite of these difficulties, foreign relief workers continued serving in China, designing schemes to rebuild the nation, until 1947 when UNRRA officially ended its global operation. One year later, the United Nations General Assembly adopted the Universal Declaration of Human Rights in Paris, which was, however, used by the Nationalist Government as a political tool to play against the Chinese Communist Party during the civil war, while the Declaration itself received relatively limited public attention in China. Such political difficulties challenged UNRRA’s operations in China as well. Still, China was not an outsider, but a distinctive participant in the Global South that took a part in shaping global enthusiasm in human-right discourse, and humanitarian practices in the immediate aftermath of the Second World War. Therefore, the history of international aid in 1940s China is best understood as a process through which a non-Western sovereign state incorporated international aid into its national plan of recovery than a conventional narrative in which China was only a passive recipient of international humanitarianism.