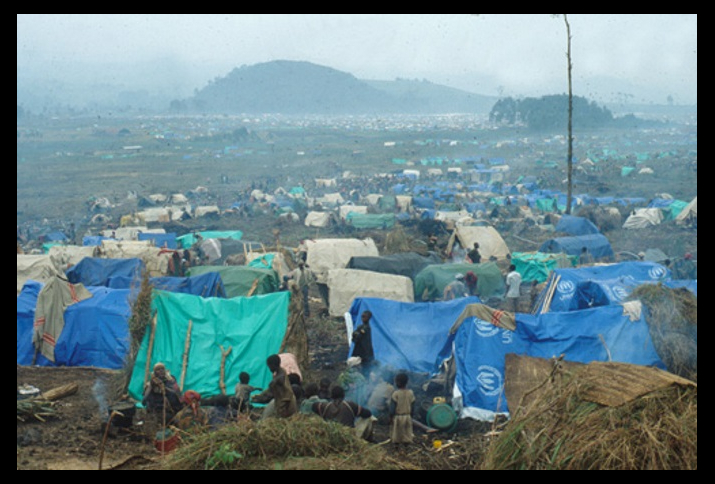 Engaged universals never actually take over the world; their universalism is situational.“
—Harri Englund, Prisoners of Freedom: Human Rights and the African Poor[1]

As Hannah Arendt anticipated in 1951, refugees have become a major issue in contemporary societies. Writing just three years after the Universal Declaration of Human Rights had been adopted in 1948, Arendt argued that refugees exposed a fundamental tension between universal human rights and the sovereignty of nation-states. For Arendt, human rights were an abstraction; the only real rights were those possessed by citizens. Deprived of citizenship, as Arendt had been after fleeing Nazi Germany in the 1930s, refugees lacked the necessary “right to have rights.”[2]

A long two decades later, the context of global refugee migrations had changed, expanding from postwar Europe to postcolonial Africa, Asia, and beyond. And for many observers, the end of colonialism had given way to a new refugee regime based more on humanitarianism than rights. Mahmood Mamdani, a young Ugandan Asian academic exiled to London following Idi Amin’s 1972 Asian expulsion, wrote about this in a personal account from 1973, explaining that his experience at a refugee transit camp in London’s Kensington Church Street had changed his idea about refugees. “Contrary to what I believed in Uganda,” Mamdani described in From Citizen to Refugee, “ a refugee is not just a person who has been displaced.... A refugee is in fact more akin to a child: helpless, devoid of initiative, somebody on whom any kind of charity can be practiced; in short, a totally malleable creature.”[3]

Viewed historically, the perspectives of Arendt and Mamdani fit on a continuum. For Arendt, a European writing in the United States within a decade after the end of the Second World War and the Holocaust, refugees were a category of person existing outside of the law. Stripped of citizenship, refugees were rightless. For Mamdani, an Ugandan Asian writing in Britain amid postcolonial crises in Africa in the 1970s, refugees were not simply deprived of rights; they were objects of humanitarian concern, attributed with innocence and vulnerability.

By the 1990s, as Jacques Rancière has contended, this shift from human rights to humanitarianism had become even more pronounced, albeit with a new twist. In “Who is the Subject of the Rights of Man?,” Rancière argued that, in a post-Cold War age, human rights “turned out to be the rights of the rightless.... They appeared more and more as the rights of the victims, the rights of those who were unable to enact any rights or even any claim in their name.” For Rancière, it was with the 1990s, as military-humanitarian interventions were made in the name of human rights, that the “actual subject of the rights of man became human rights.” And this raised a burning question: “what lies behind this strange shift from Man to Humanity, and from Humanity to the Humanitarian?”[4]

Strange as this shift has been, an equally and perhaps even more momentous change since 1948 has not involved what human rights are, but who has claimed and modified them - a transformation in which refugees have played a significant part. With the end of empire in the 1960s, human rights and humanitarianism both became a language that anyone, at least in theory, could speak and act upon. And this broader story was always more than one of disempowerment or contradiction: it was also a political contest, even and especially where refugees from formerly colonized societies were concerned. As Mamdani contended already in the early 1970s, it was important to criticize how humanitarianism closed doors; but it was also urgent to account for how new ones were pushed open. From Citizen to Refugee, as the book’s preface underscored, was also a “story of those who refused to become refugees” through individual self-determination and collective protest.[5]

The period of the 1970s and 80s when Mamdani wrote saw a rise in the number of non-European refugees seeking asylum in Europe. Beyond singular accounts from writers, other histories of “refusal” can be found. And it is surprising how television footage from that period provides clues, demonstrating how the universalism of human rights was always engaged in particular situations, as well as how refugees adapted the language of human rights to refuse being seen as powerless.

In the 1980s, for example, the West German public broadcasting station Westdeutscher Rundfunk (WDR) started running programs about refugees from Africa, the Middle East, and South Asia seeking asylum in West Germany, which became Europe’s largest home to refugees starting in the 1970s.[6] As elsewhere in the global North, popular media in West Germany propagated spectacular, racialized, and gendered knowledge about Third-World refugees seeking asylum in Europe. This often came as short exposés that were meant to foster public sympathy with refugees by unveiling the poor conditions in which they lived.

Yet significantly, sometimes the tables were turned. Ashwin Raman, a documentary filmmaker who fled India in the 1970s and was granted asylum in West Germany, produced a documentary feature for WDR in 1981 called In Deutschland in der Fremde (In Germany, A Foreign Land) about “Third-World” refugees in West Germany. The film, which also featured Raman’s involvement in the West German chapter of Amnesty International, was highly critical of the asylum process. And in a reversal of the usual mode of representation, it made West German bureaucrats—not refugees—the object of spectacle. It also provided a platform for refugees: given a chance to speak for themselves on camera, many seized the opportunity to tell their stories. And while few would denounce their home governments, they often openly condemned their new hosts.[7]

Television offered a forum for refugees, and many voiced their political demands in the language of human rights. In a 1983 television program about asylum seekers in Düsseldorf, where roughly two-thirds of all refugees were from West Africa, refugees criticized their predicament. “Look at what they have done to us,” said one man, pointing to a wardrobe that had been broken by police during a raid on a home for refugees. He added that the owner of the belongings had since disappeared, suggesting he had probably been deported. “This is no way to treat us. We are human beings.” He and others opposed their inability to move around or seek employment, their housing conditions, and the discrimination they endured. “It is our task to come together and say that we don’t stand for this. There is no need to worry. There is the law. We just need to organize and find the right people who will work these things out.” These and other refugees had gathered to organize against their precarious legal and social status. And their chief aim, as one organizer put it, was simple: “we want our dignity.”[8]

In today’s age of refugee bans, deportations, and crises, as well as of refugee caravans and journeys across land and water, it is apparent how much the meaning and power of human rights has changed since 1948. In many contexts a humanitarian emphasis on suffering and compassion has superseded a concern with rights and justice, as Didier Fassin has argued.[9] This has led many observers to question the place of human rights in a politics of justice and to contemplate, as Samuel Moyn has put it, whether human rights are “not enough.”[10] By contrast, in other, very different instances it is not only Arendt’s “right to have rights” but the very category of human that is at stake. In a recent interview responding to the arrival of Central American migrants on the U.S.-Mexico border town of Tijuana, Mexico, the city’s mayor, using a turn of phrase, proclaimed that “human rights are only for upstanding humans [los derechos humanos son para los humanos derechos],” a view shared by many in power on both sides of that border and around the globe.[11]

In this context, the voices of Mamdani and other refugees, past and present, who have demanded dignity and “refused to become refugees” remind us that universal concepts are never simply abstract or static; they are engaged and contested. And while such universals have increasingly constructed refugees as innocent victims who require compassion,[12] the voices of refugees themselves beckon us to consider not only how and why, but also on whose terms human rights have been claimed and changed since 1948.