A review of the film Beanpole (Dylda) by Kantemir Balagov 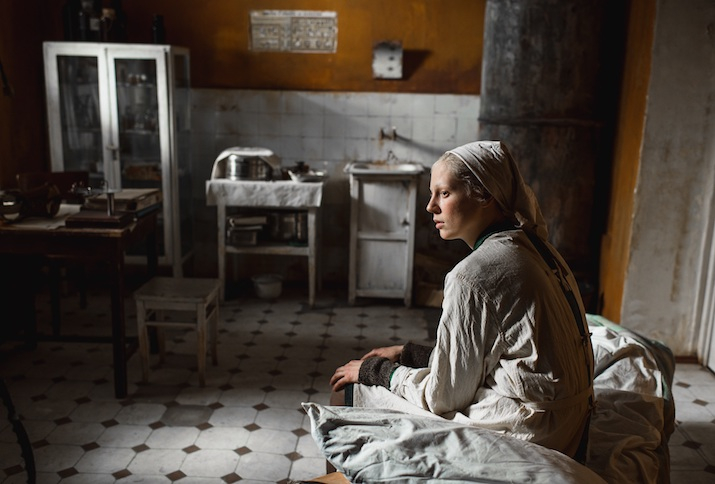 There is a Brothers Grimm fairy tale ‘Schneeweißchen und Rosenrot’ (Snow-White and Red-Rose) which tells the story of two sisters who, through their good deeds, uprightness and bravery liberate a cursed prince from his evil captor. The lively Rosenrot ends up marrying the prince, while Schneeweißchen is paired with his brother.
Kantemir Balagov’s film Beanpole also features two girls. One is white as snow and everything around her including the everlasting snow in the background reflects her silent demeanour and pale complexion. The other one is lively and fun-seeking, and she attracts all things red, starting from her dyed red hair to the blood that pours from her nose at times of stress. Yet with the intense colour-coding of the two main protagonists, the similarity to Grimm’s upbeat fairy tale ends. There is no prince (or his brother) at the end of the story of Iya and Masha, who met at the front, became lovers, then parted ways when Iya was decommissioned (presumably because of her episodes of ‘zooming out’) and Masha continued to fight in order, according to her own words, to revenge, and who meet again a third of the way through the film in post-war Leningrad. There are no princes in this town of fog, snow, trams, bridges and dilapidated grand houses, only men who are physically or mentally crippled or both. What remains is the love between the two girls. But that too becomes clear has been terribly deformed by the war. Even the good deeds, which echo some of the Grimm fairy tale, have acquired a dark and ambiguous character and seem to hit back rather than reward their perpetrators. 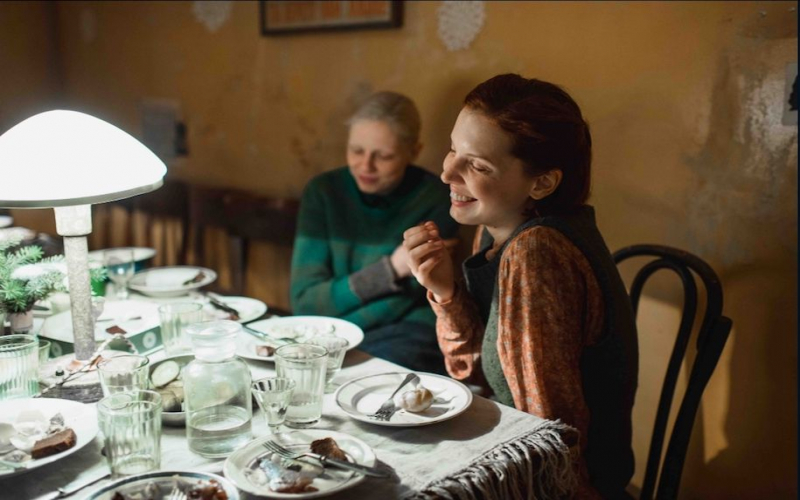 Beanpole is a film that plays with the viewer’s expectations. It reveals itself notto be many things first expected. Many reviews describe it as a historical film and indeed it starts with a screen text telling the audience that the story is set in post-war Leningrad. The communal apartment (which, as a concept, is a national post-Soviet obsession and has made many film appearances over the years) where Iya has a room provides a historical backdrop to much of the story, showcasing both past Imperial grandeur in the enormous tiled fire places and Soviet ingenuity in the many clever arrangements its inhabitants have thought up to make life more bearable. Yet it becomes increasingly clear that the historicity of the props and the initial pinpointing of location is a smoke screen. Rather, the film operates in a chronological and topographical vacuum. The winter in which the films starts never ceases, even though we know that Iya is going through several menstrual cycles. Even more telling, there is no reference to Stalin or indeed to the war by the name under which it is famous in Russia: the Great Fatherland War. When an official turns up in the hospital to thank the soldiers for their efforts, there is no mention of communism. Indeed, there are no Soviet insignia, no hammers or sickles, no Red Stars. In terms of topography the architecture is unmistakably that of Leningrad with its grand houses, canals and imperial architecture, but there are no shots of Leningrad’s famous vistas. Rather than making a point about post-war Soviet life, the film invites the viewer to reflect on life after war and trauma as such.

The film also confounds the audience’s expectation about the title. While it becomes clear in the very first scene why Iya is called Beanpole – she towers over everyone in the room and is exceptionally thin, it also soon becomes clear that neither does her physique have any relevance to the narrative of the film, nor indeed is this a film about her. The film only really starts when Masha appears on the scene – a moment which literally leaves the audience in the dark about its significance since it is shot entirely without any lighting. Masha enters Iya’s room when , embracing her, talking into Iya’s silent void, while the viewer is still reeling from the previous scene, which might or might not have ended with death of Iya’s little boy Pashka. Through chatter and silence it slowly becomes clear that this new arrival is Iya’s lover, that Pashka was her biological child, conceived and born at the front, and finally that Pasha is indeed not anymore alive. Yet just asoon as these revelations have shed new light on the personal dynamics in the film, Balagov takes the audience down the route of another deception. Following the harrowing encounter of Masha and Iya in the dark, resulting in Iya’s confession of responsibility for the death of Pashka, the end of this long shot shows Masha composing herself in an instance. She wants to dance and drags the distraught Iya to the local House of Culture (the existence of which is one of the few explicitly Soviet references in the film), which is closed, but where they nonetheless meet two boys on the prowl. Masha ends up having rather clumsy sex in the back of his car with one of them – the shy and inexperienced Sasha. It is only in the next hour of the film that it becomes clear that, rather than accepting Pashka’s death with a shrug, the loss of the little boy on Iya’s watch sets off a chain of deeply disturbing emotional pressures – pressures which feel no less destructive than the havoc of war, whose bitter scars are on display in the military hospital, where worn out veterans try to heal from their physical and mental traumas while the no-less-worn-out staff care for them in their roles as the less-damaged yet by no means healthy. Masha joins Iya as a nurse but the line between patients and staff is blurred with Masha’s body showing horrific scars, while Iya continues to have episodes of mental absence. It is Masha’s collapse due to exhaustion on a hospital bed, which sets in motion the central plot line of the film, which shall not be revealed here. Suffice to say latest at this stage of the film it is evident that this is a film about post-traumatic damage, which is shown in such merciless and uncompromising way as to leave no heroes on the battlefield.

As the film progresses, more and more doubt arises, if this is the exploration of a historical trauma or if the war and carefully placed markers of Sovietness – the communal apartment, the uniforms, the colouring of the film – serve as a convenient cover to tell a more current post-traumatic story. Indeed, the real hint that historical accuracy has been suspended (or was never the intention) is towards the end of the film, when Masha meets the parents of her touchingly insistent suitor Sasha (the ‘greenhorn’ from the car, who increasingly intrudes into Masha’s and Iya’s room in the communal apartment, even leaving his mark with some green paint on the walls), who live in a fancy, secluded estate complete with a greyhound-type dog and an elderly servant with white apron. From the historian’s viewpoint this can be interpreted either as a grave blunder or, more likely, as a provocation. There were no palaces inhabited by private people in the postwar Soviet Union. And while some select few families did indeed have domestic servants, privilege came through position not wealth. Yet there is no reference to status, rank, party affiliation or the like with regard to Sasha’s parents. They seem to be oligarchs sui generis for reasons which are not apparent anymore but accepted by everybody apart from the ‘mad’. In a previous scene, Sasha’s mother is visiting the hospital as a benefactor and is received with respect and curtesy by staff and patients – except by one soldier who continues clapping her speech long after everybody has stopped, exposing the mockery of her meagre gifts to those who have given everything. He is gently led away.

There are a number of historical associations that come to mind with reference to this scene. There is the figure of the holy fool, anchored deep in Russian folklore and cultural memory. It’s hard not to think here of the ranting madman in Andrei Tarkovsky’s Andrei Rublev – another film maker who purported to make historical films but actually commented on his own times. It’s hard also not to think of the Soviet classification of dissidents as schizophrenic and the use of psychiatry as an instrument for imposing conformity. It is hard not to be reminded of the parody of Soviet political life when applause after Stalin’s speeches was never-ending, because nobody wanted to be seen to lower their hands first – a practice that endured well into the Brezhnev years. Yet it is the scene in Sasha’s family home that seems to provide the key to unlocking the historical allegory of the film. As in other scenes the veneer of Soviet visual references is broken by frequent appearance of imperial symbols – in this case the baroque architecture of the manor building itself and the aristocratic dog. 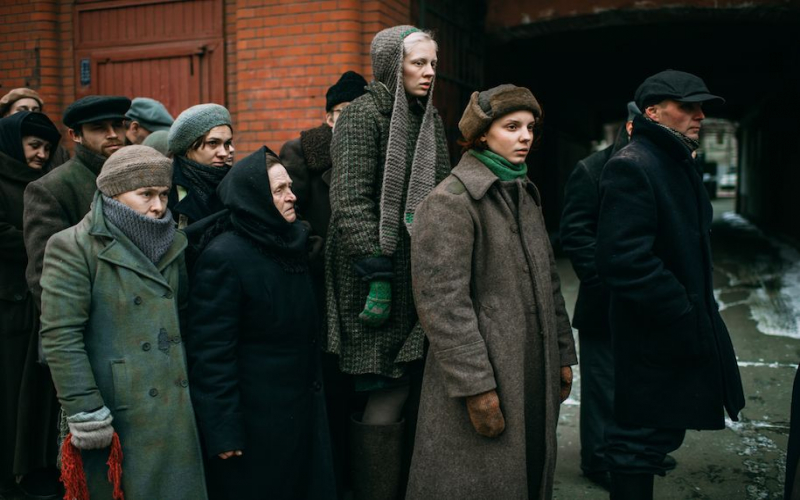 The historical accuracy of Soviet privilege might be dodgy, but the existence of considerable privilege in the Soviet Union for the nomenklatura was a fact. Yet both Tsarist and Soviet times seem to serve simply as shadows, giving substance to the abstract meaning of Masha meeting Sasha’s parents: an encounter between those who risked everything and lost much and those who for whatever reason emerged as the winners from the struggle. Director Balagov seems to be making reference here not to the post-war world, but to the post-socialist one. From the trauma of the changes and chaos of the late 1980s and early 1990s arose the post-socialist world order, when indeed some lucky few people acquired private palaces (including the one Putin seems to have built on the Black Sea) and when symbols of old privilege merged with new realities of inequality. A curious feature of this scene is also Masha’s re-telling of her own past, describing a crass struggle of survival within the army which necessitated the use of her body as protection and instrument to obtain bare necessities. This account is in contrast to a previous conversation with Iya, where she indicated that Pashka had been a love child conceived from someone whom she went on to revenge on the battlefield. Sasha’s mother, however, is impressed by the steeliness Masha describes, indicating that survival and calculus were also the guiding features of her life. Sasha (the prince?) is too soft to take this brutal ‘truth’. He, like all men in the film, pales in comparison to the vigour of the women who surround them. 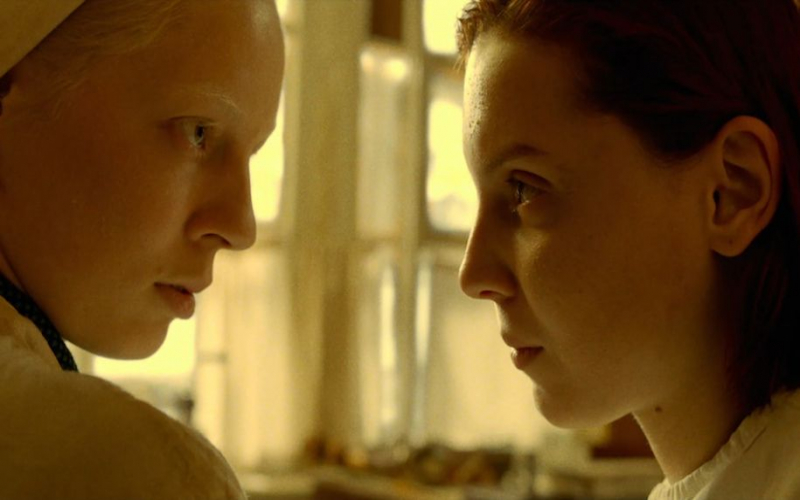 Beanpole ends as mysteriously as it begins. Masha and Iya might be on a path of healing. Or they might be at the end of their time together. We have learned in two and a bit hours not to assume anything. But hope is still allowed. Not least because Beanpole is still alive at the end, which, given the relentless bleakness of the film and one of the final scenes, in which a blond women dies under a tram carriage, must be counted as a concession to a more hopeful vision of the future. Maybe war will indeed end at some point.