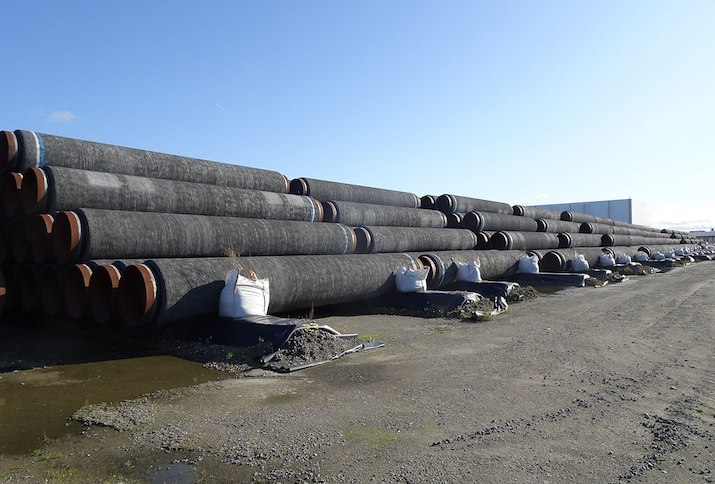 Europe’s response to Russia’s war in Ukraine follows the logic of the fossil fuel age. More than two weeks into the invasion, as 2.5 million people have fled Ukraine and many more must fear for their lives, Russia’s energy exports have remained largely unaffected by the unprecedented economic sanctions that EU countries have taken in response to this war of aggression. The reason is simple. The energy exports financing the Russian state and its military are the energy imports that have allowed for the economic growth, prosperity, and material comfort that many in Europe have enjoyed in recent decades. Despite a consensus about their contribution to climate change, hydrocarbons still define European politics.

Energy Links the EU to Russia

The EU’s hesitance to target Russian energy exports reflects the material realities of Europe’s energy system and its close ties to the fossil riches of distant Siberia. All EU member-countries are net importers of energy, and many rely heavily on Russian resources. In 2020, the country supplied 38.2 percent of the gas and 25.7 percent of the crude oil brought into the EU. Often overlooked in the public debate, coal also features prominently in the energy chains between Russia and EU countries, with 49.1 percent of the EU’s hard coal imports coming from Russia in 2020.[1]

These dependencies mean that prices on European energy markets are highly sensitive to fluctuations in the amount and frequency of fuel imports from Russia. When Putin declared war on Ukraine, energy prices in the EU were already soaring, in part because Gazprom had kept its deliveries at the absolute minimum of its contractual obligations for months. At a time when EU energy consumers struggled to pay for their rising energy and gasoline bills – with many still recovering from the economic fallout of the COVID-19 pandemic – cutting fuel imports from Russia seemed too large a political and economic price to pay.

The EU’s close energy ties with Russia have their origins in the Cold War period. From the late 1960s, and particularly in the wake of the 1973-74 oil shock, oil and gas from Soviet Russia travelled thousands of kilometres west to countries such as Germany, Italy, Austria, and France, where they fuelled cars and industrial production and brought light and warmth into people’s homes. Many of these links initially formed through barter arrangements in which Western European countries exchanged pipes and other technology for Soviet fuel deliveries. The Soviet Union also used energy exports as a tool to foster its economic and political ties with the members of the Council for Mutual Economic Assistance in Eastern Europe.[2]

Following its independence in 1991, Ukraine has been the major transit country for these energy flows, most notably natural gas. Initially more than 80 percent of Russian gas exports to Eastern and Western Europe went through Ukraine. Since the 2000s, new pipelines, most importantly Nord Stream 1 linking Russia and Germany through the Baltic Sea, supplemented the fossil-fuel transport infrastructure that had been in place since the Cold War. Designed to bypass Ukraine, and thus to channel the rents from fossil fuel exports to Russia alone, these new transport routes deepened the energy connections between Russia and Western Europe. European reliance on Russian fossil fuels grew as Russia’s dependence on Ukrainian energy transits decreased. Nord Stream 2 pipeline would have reinforced both tendencies. The day after Russia’s president Putin recognized the independence of the self-declared “People’s Republics” of Luhansk and Donetsk, the German government froze the highly controversial pipeline project.

Historians and political analysts have understood the energy flowing from Russia to Eastern and Western Europe as an object and an instrument of foreign politics; as a vehicle to build trust and foster collaboration; and as a source of rent for the Soviet state and for post-Soviet Russia and its elites. Fossil fuels from Russia have certainly played all these roles. But there is more to them. In Carbon Democracy, political theorist Timothy Mitchell traces how fossil fuels shaped the history of modern democratic institutions and the conveniences enjoyed in 20th century consumer societies. Social and political history is not determined by energy. But neither can we think about modern societies and their politics without considering the role which the sustained extraction and consumption of the earth’s fossil riches have played in shaping them.[3]

Europe’s democracies are carbon democracies with foreign relations framed by the demands of the fossil fuel age and “petrocultures,” in which the private car signifies personal freedom and the lavish sponsoring of sports clubs by major energy companies is commonplace. The war in Ukraine once again exposes the omnipresence of fossil fuels in politics and people’s lives, putting political leaders between a rock and a hard place. For instance, Annalena Baerbock, Germany’s Green Minister of Foreign Affairs, had campaigned to become chancellor of a “climate government” during the 2021 elections. Yet it was Baerbock who pointed to Germany’s “energy security” and, notably, to its dependence on Russian anthracite coal, when explaining why Germany opposed excluding Russia from the international payments network SWIFT.

The war in Ukraine challenges Europe’s carbon democracies to such an extent that governments have begun to revisit their climate policies as they prepare for possible upcoming fuel shortages. In late 2021, the German government gave in to intense Green lobbying and decided that all coal plants should be closed by 2030. Just days after the Russian invasion began, Robert Habeck, Germany’s Green Minister for Economic Affairs and Climate Action, indicated that it may become necessary to use coal plants to a larger degree  than stipulated in the government’s climate action plan. Given the country’s reliance on imported anthracite, this policy change would entail an increased use of lignite-fuelled power stations, by far the most harmful option from a climate point of view. Other EU governments, like those of Romania and Italy , similarly announced a reinforced reliance on coal, at least for the short term. As governments try to respond to the war in a world built on fossil fuels, climate action risks falling victim to the illness it is meant to cure.

Yet it would be misleading to think that nuclear power presents a way for achieving European energy autonomy. In 2020, Russia provided 20.2 percent of the EU’s uranium supplies, surpassed only slightly by Niger (20.3 percent) and followed by Kazakhstan (19.2 percent).[4] For France, the EU´s number one producer of nuclear power, Russia has been a crucial technological partner; and a destination for some of its nuclear waste. Likewise, a number of other European nuclear industries, including those of Finland, Hungary, Slovakia and Bulgaria, have been largely reliant on nuclear fuel and technology from Russia. EU-Russian energy entanglements run much deeper than what is often assumed.

The Price of Half-Hearted Climate Politics

Russia’s invasion of Ukraine brings home in the darkest of ways the dangers linked to international relations, institutions, and lifestyles built on fossil fuels. In light of the most recent events and EU-Russian energy links, the European Commission’s 2021 decision to classify natural gas and nuclear power as “sustainable” energy sources during a lengthy “transition” period looks not just environmentally dubious but also politically naïve. For years, leading politicians and economists have said over and over that the move away from fossil fuels would have to happen cautiously given the supposedly high costs associated with this process. The price of protracting this shift, however, is even more considerable. Time is of the essence – such is the common lesson we should learn from wildfires, floods, storms, and now the war on Ukraine.

Europe’s slow response to climate change is now a clear economic and political liability as an aggressive army, financed by the rents from Russia’s fuel exports, harms civilians, destroys critical infrastructure, and threatens Ukraine’s national sovereignty. Given that the move away from fossil fuels has been seriously delayed in recent decades, political leaders are now left with mostly poor options to respond to the war’s likely repercussions on Europe’s energy markets. Hostages of decisions that for too long have prioritized the status quo, they now face a scenario in which starkly rising energy prices, burdening above all the less well-off, combine with a further delay of urgently needed climate action. Over the past decades, there has been no dearth of voices warning that failure to accelerate the move away from fossil fuels would inflict serious harm on people and the environment. Putin’s war in Ukraine and the dilemmas facing Europe’s decision-makers are yet another, sad confirmation of this truth.