The Universal Declaration of Human Rights in East Germany 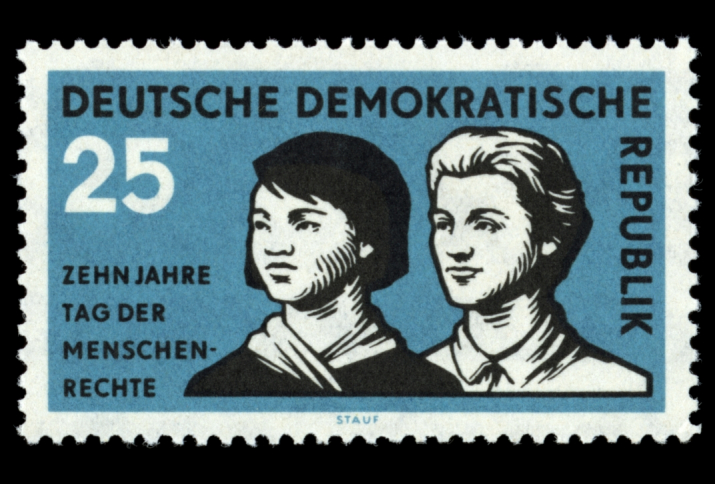 It would be easy to presume that the Universal Declaration of Human Rights had always been a symbol of opposition and dissent in the German Democratic Republic. Passed by the United Nations General Assembly on December 10, 1948, the UDHR contained a number of provisions that contradicted the political and social order of the GDR as run by the Socialist Unity Party (SED). It demanded an independent judiciary, prohibited arbitrary arrest and invasion of privacy, and guaranteed the right to leave one’s own country. In East Germany, where the judiciary was firmly an ideological organ, the Stasi regularly conducted mass surveillance and arbitrary detention and those seeking to leave the country illegally were shot at the border, this would seem to be a document seen to be inherently hostile to SED rule. Even the social rights contained in the UDHR, in particular the right to strike, were contrary to the legal realities of East Germany where citizens could not demand rights from the state that would obstruct the will of the party.

Yet over the course of East Germany’s existence, the Universal Declaration was more likely to be invoked by the SED than by its domestic opponents. The SED came to view the Universal Declaration and the UN human rights system as a whole as an ally to the Socialist Bloc and the contents of the UDHR reflected in the achievements of socialism within the borders of the GDR. For decades this was not challenged by East Germans on a mass scale, until very suddenly in the late 1980s, human rights and the UDHR became symbols of the democratic opposition. This article will trace the trajectory of the UDHR in East German public discourse from its passage in 1948 and the reaction by the SED in the Soviet Occupied Zone, through the commemorations of the UDHR on its many anniversaries before the ultimate collapse of SED in 1989.

In the first ten years of the UDHR’s existence, the SED was torn as to what it represented: a noble effort to realize human rights around the world against the imperialist powers or a subversive and illegitimate effort by the West to provide a pretense to interfere in the internal affairs of the Eastern Bloc? Already in 1946, in response to attacks from Social Democrats, the SED had unveiled a new slogan: “no human rights without socialism.”[1] the decision of the Eastern Bloc to abstain on the UDHR at the UN, alongside Saudi Arabia and South Africa, however, meant that East German media coverage of its passage was subdued. In a front-page article in the SED national organ Neues Deutschland, the headline proclaimed “The Struggle for Human Rights is the Struggle against the Old and New Fascism,” but quoted the Soviet delegate, Andrei Vyshinsky as saying that as written the UDHR represented an “unbearable interference in the internal affairs of all states.”[2]

Even at the 10th anniversary of the UDHR, the SED was unable to commit to the commemoration of its passage. To celebrate Human Rights Day in 1958, the Postal Service released a commemorative stamp series tentatively embracing the UDHR’s message of racial equality: One stamp depicted a European and an African man, while the other showed a European and Asian. The Ministry of Foreign Affairs prepared a public statement commending the Universal Declaration and as “highpoint in the fight of the nations for democratic rights and freedoms,” and “an achievement of the antifascist and anti-colonialist struggle.”[3] But at the last minute, the statement was rejected and the UDHR’s passage went unremarked in the East German media.

Only a year after the SED chose to avoid mentioning the anniversary of the UDHR, it decided to create its own organization dedicated to the cause: The Committee for the Protection of Human Rights. Founded to campaign on behalf of imprisoned West German communists, the organization evolved into a socialist human rights think tank and acted to legitimize new academic work on the subject. By 1963, the East German media was filled with celebrations marking the 15th anniversary of the UDHR. On Human Rights Day, Neues Deutschland devoted a full page to the contents of the UDHR with one article on the right to peace, one on how the GDR fulfilled Art. 26 (the right to education and free expression) and another on how West Germany failed to realize social rights. SED media also closely tied the UDHR to the fight against Apartheid and described it as a document that “stigmatized racial hatred as a threat to freedom and peace.”[4]

At the next two anniversaries, GDR coverage of UDHR anniversaries only expanded: In 1964, East German legal academic Hermann Klenner published his seminal text outlining a theory of socialist human rights, Studien über die Grundrechte, and 1968 was named International Human Rights Year by the United Nations.[5] The SED aimed to convince the newly admitted UN members from the global south that it was a champion of the self-determination, which was now the first article in both of the freshly minted UN Human Rights Covenants – the legally binding treaties developed from the UDHR and passed in 1966. Along with commemorative stamps and an international symposium of experts, the SED celebrated the UDHR as a foundational text, one that had always been supported by the socialist bloc, in spite of Western efforts to make it into a tool of interventionism. In 1973, as the negotiations over the Helsinki Process were already underway, the SED celebrated finally joining the United Nations and marked the 25th anniversary of the UDHR again with speeches, events, and postage stamps. By this time, the UN human rights agenda had narrowed almost entirely to the problem of racial discrimination and Apartheid, reinforcing the SED’s belief that East Germany represented the ideals of the international community in spite of its status as an effectively one-party state.[6] In honouring the UDHR, the President of the Volkskammer declared that “human rights had found a home in the GDR.”[7]

The Helsinki Accords of 1975, a treaty between East and West which contained provisions for human rights, accelerated, but did not start the process of challenges from below. Already in 1968, revisions to the GDR Constitution prompted Church leaders to demand further protections for religious freedom – the reforms coincided with International Human Rights Year, which the Church leaders used to their advantage citing Art. 19 on freedom of thought and conscience. Beginning in the early 1970s, those seeking to leave the GDR discovered the passage on the right to free travel in the UDHR and employed it, among many other claims, in their demands to migrate West.

In spite of a surge in applications to exit the GDR after the passage of the Helsinki Accords, the SED remained confident: commemorating the 30th anniversary of the UDHR in 1978, the GDR Committee for Human Rights declared that under socialism: the social roots of exploitation, war and misery, of racism and genocide have been forever eradicated. It is not the bourgeoisie, which proclaimed its ‘human rights’ more than 200 years ago, but the working class that has come to power since 1917, which has proven to be a reliable advocate of the rights and freedoms of all working people.[8] East German media covered the anniversary, as it had in 1968 and 1973, with articles on the superior realization of human rights under socialism and the horrors of life in Portugal, South Rhodesia, South Africa or Nicaragua and of course the USA.

In the mid-1980s, peace and environmental activists turned to the language of human rights to demand domestic political reforms forming the Initiative for Peace and Human Rights – the first independent human rights group in the GDR. By the 40th anniversary of the UDHR, the document had become a public site of contestation between dissidents and the SED. While the GDR government proclaimed its commitment to peace and the recognition that “all social, economic, cultural, civil and political rights form a unity,” through the realization of socialism, this was now openly challenged.[9] By contrast, dissidents used the anniversary to decry the absence of “peace and justice on the earth,” but also to charge the SED with “violating human dignity in our own land.” They demanded an independent judiciary, the end of censorship, and real democratic rights for all citizens to take part in governance of the GDR in order to realize basic human rights.[10]

Less than a year later, in September 1989, demonstrations in the streets of major East German cities threw the GDR into chaos and mass emigration undermined SED rule. By October, the SED had abandoned control of public spaces and the citizens of the GDR moved from asserting their rights on paper to acting as though they were already a legal reality. On November 9, the Berlin Wall opened and the right to free travel became a reality and on December 1, the SED abandoned its monopoly claim to power paving the way to free elections the following year. While the SED had celebrated so many Human Rights Days marking the passage of the UDHR in 1948 as a moment that legitimized the rule of the party and the righteousness of state socialism, on December 10, 1989, the day was now devoted to the realization of a new vision of human rights through democratization.