”Raman, you have come out and we will reach the end.”

Belarusian Local Communities in the Face of State Violence 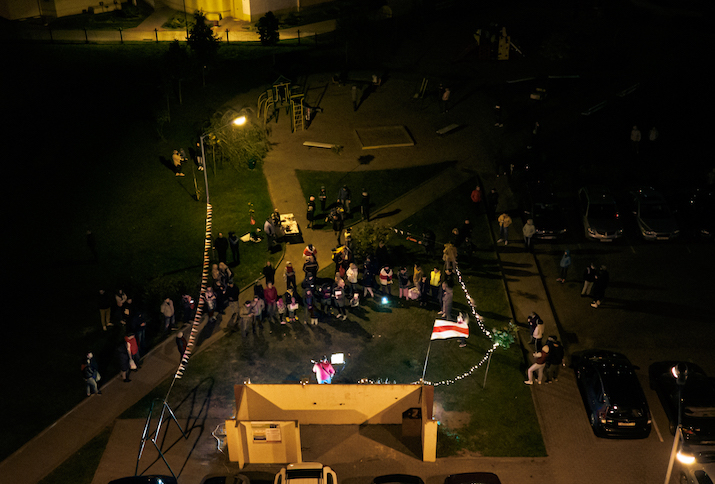 In memoriam of Raman Bandarenka

“I am going out” was the last message sent by Raman Bandarenka to a Telegram chat uniting people from his neighbourhood in Minsk. In the evening of November12th, he went down to his courtyard, known by protesters as the Square of Changes. The Square of Changes appeared in Minsk in the beginning of September 2020 to support initiatives of a local community in times of political contestation. Raman went down to protect a fence decoration made from white-red-white ribbons that became a target for a group of unknown men in masks and sportive clothing. To watch over protest symbols installed in their Square of Changes became a routine action for the locals. Their neighbour, Stsiapan Latypau[2], was detained in September in somewhat similar circumstances: he was asking men in masks to introduce themselves and to explain their reason for destroying a graffiti[3], a symbol of the Square of Changes. This time, Raman was beaten up in the same courtyard, then put in a blue van, and taken to the police station. The next day he died in a hospital from the received traumas. All elements of this story – anonymous men in civic clothing who seem to have the carte blanche to brutal violence, blue vans without a registration number, write-red-white ribbons, alternative names to cities’ places, and local chats – are the symbols of the ongoing Belarusian protests.

Raman’s death has shaken many Belarusians who by that time had been protesting against state violence and Lukashenka’s illegitimate grip of power for 97 days already. While I am writing this text, the police is clearing out the Square of Changes from the people and all signs of their solidarity and grief – candles, flowers, Raman’s photos, posters, and flags. All who decided to defend this memorial place have been detained. Those who managed to escape in the adjacent houses are blocked as the police stays in the neighbourhood and checks passports of all coming out from the buildings. So how has it happened that neighbourhoods have become a site of political contention in Belarus and what does this fact say about the protests?

The strategy of localised and decentralised protests that foregrounds local communities has appeared already in the first protests in August 2020. It was a result of two factors: a composition of protesting communities and a state reaction to the protests. From the beginning, the protests have had no particular leader. Sviatlana Tsikhanouskaya was an alternative candidate but she has never attempted to organise and lead a protest.

Contrary to the previous elections when the oppositional candidates called their supporters to gather in the central squares, her team proposed that people gather at their local polling stations and wait for the election results in their own districts. In spite of all doubts that it would disperse people and diminish a protest potential, this approach did have some important consequences. It brought into focus a shared responsibility and mechanics of power at a local level. Polling stations are usually organised in schools and positions in local electoral commissions are predominantly filled with the teachers who work in these schools and live nearby. In such a context, manipulations with final protocols at the local level intensified the protest dynamics.

Furthermore, the role of neighbourhoods was crucial in responding to the unprecedented state violence of the first protest days. Being unable to gather in the city centers because of the heavy police presence, its brutality, and the Internet blockage in Belarus, people assembled in the streets close to their own homes. Being at first a forced strategy, organisation of local protests turned out to have some positive sides. In search for escape, protesters knew the area better than the police and could find support and help easier since they were closer to home.

Local Communities and the Dynamics of State Violence

Since the first protests that made neighbourhoods organise in response to the police brutality, their following activities have been intertwined with the dynamics of state violence. In a rather short period in late August and the beginning of September when police brutality and mass repressions subsided, neighbourhoods flourished as a site for social bonding. The locals organised music concerts and lectures, made tea parties and children’s workshops, decorated their courtyards and made symbols of their districts[4]. Behind that which on the surface looked like politically insignificant entertainments, important processes occurred. Horizontal relationships between people developed, neighbourhoods became associated with a meaningful communal experience, and the feeling of belonging to a local community emerged.

At the same time, newly formed communities had, in fact, a political bearing. It manifested not only in white and red colours chosen for local flags and decorations and protest songs but also in a mobilising potential of local communities. Initiatives and forms of actions travelled from one neighbourhood to another, local flags appeared in big national marches on Sundays, and the idea of local solidarity spread further.

When in late September police violence exacerbated in street protests, political fights came closer to home again. With this, local communities experienced a considerable pressure: local chats and evening gatherings were targeted by the police, the artists who performed in local concerts were detained, and some local activists and administrators of chats–Stiapan Latypau, Nikita Yatsynovich, Andrei Karpovich, and Inna Vasileva–became suspects of criminal investigations.

A space for resistance has been shrinking, so even a small thing, such as a white-red-white sweets, becomes a ground for an administrative case[5]. Indeed, material signs of the protests can be wiped out from a public eye but the experience of self-organisation, joys and challenges of collective endeavours, and a communal feeling are of another matter. The locals from the Square of Changes who hid Belarusians from detention in their apartments in spite of all police attempts to control and to impose fear have proven that bonds formed in the evening concerts and tea parties work to protect the people and sustain the protest.

While this text was preparing for publication, protests in neighbourhoods, the so-called Marches of Neighbours, have replaced big national marches on Sundays. According to my friends’ experience, it does feel safer to march in their own neighbourhoods. Besides, the number of the people detained by the police that decreased from 1291 arrested on November 15 to 416 detained on November 29[6]  also proves that in the context of intensifying state violence the strategy of decentralised protests works.

[1] One of the posters on a protest march after the death of Raman Bandarenka. It refers to his last message to a local chat while promising to continue the struggle.

[2] Stiapan Latupau is persecuted on the base of the Art. 239 of the Criminal Code (Organisation of mass disorder). Civil rights defenders recognised him as a political prisoner.

[3] The graffiti portrays two men who played at one of the public gatherings a song by Viktor Tsoi ”Changes”, one of the protest songs for Belarusians. For this, they were called DJs of Changes.

[4] A collection of neighbourhoods flags of different Belarusian towns.

Alena Minchenia, ”Raman, you have come out and we will reach the end.”. Belarusian Local Communities in the Face of State Violence, in: Zeitgeschichte-online, Dezember 2020, URL: https://zeitgeschichte-online.de/kommentar/raman-you-have-come-out-and-we-will-reach-end