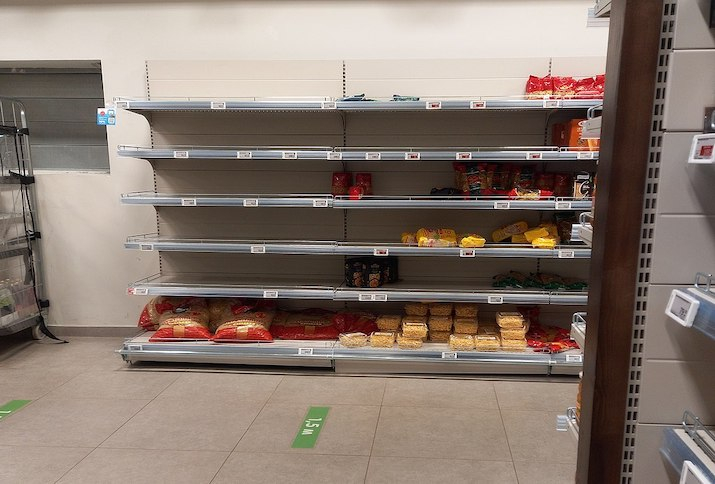 Empty shelves in a Russian supermarket because of the Russo-Ukraine war crisis,
10 March 2022. By Adzhanoev (CC0) via Wikimedia Commons

Why has Vladimir Putin launched a full-scale invasion of Ukraine? Analysts argue that Putin has changed. The interpretation runs as follows. During the COVID-19 pandemic, the Russian president was isolated and gradually lost touch with reality. Now he is trying to recreate the Soviet Union, or maybe the Russian empire. Putin has grown paranoid  and might even be insane. Whatever his mental state, his power is unchecked and his autocracy has become a personalist regime. This picture, however, is problematic for two reasons. First, it overlooks continuities in Putin’s words and actions. And second, it focuses too much on Putin himself.

Let’s start with the change thesis — specifically, the idea that a new Putin has emerged as a result of pandemic-era isolation. Strong cases have been made for this argument, but one problem is that Putin’s increased personalism predates the pandemic. A referendum to change the constitution, to allow Putin to run for two more six-year terms, was announced in January 2020, before the first lockdown. Originally scheduled for April 2020, the referendum was postponed to June–July, when it passed. Another shortcoming of the argument is that repression of the Russian opposition intensified soon after lockdown began. For example, Alexei Navalny, the leader of the opposition, was poisoned in August 2020.

In hindsight, it now seems that Navalny’s poisoning and later arrest, as well as increased enforcement of the “foreign agent” law  in late 2020, was a preemptive effort to dismantle any future opposition to a possible invasion of Ukraine. COVID-era isolation, then, did not produce a new, more despotic Putin. Instead, from the eve of the pandemic to the eve of the invasion, Putin appears to have been systematically destroying the very possibility of organized dissent—the final chapter of this campaign being the December 2021 shuttering of Memorial, a civic organization that chronicled Soviet repression. In fact, some observers see continuities in the Russian president's approach to Ukraine that stretch back for over a decade.

The change thesis includes the idea that Putin is now rebuilding the Soviet Union. But you don’t rebuild the Soviet Union by criticizing the country’s founder, Vladimir Lenin, as Putin did in his speech on February 21. Indeed, even Joseph Stalin relied on Lenin  for legitimacy. Nor is Putin rebuilding the tsarist empire. Tsarist Russia was part of a community of empires; on February 24, the day of the all-out invasion, Putin made clear his antipathy for the entire Western order, governed by the United States and its "empire of lies".

Putin, then, is neither a Soviet nor a tsarist throwback. But he has not exited Russian history or present-day Russian society. If Putin’s recent words and actions aren't a clean break with his past, they also cannot be understood independently of his country’s past, or of the way that past shapes the Russian present.

There is no question that Putin bears ultimate responsibility for the catastrophe in Ukraine. Personality, historians like to say, can be very influential at certain points in time. But there is a reason why Putin has emerged in Russia and not, say, in Sri Lanka. He is no less a creature of history than anyone else.

Some people do lose their minds, but Putin seems quite sane, even familiar. A flaw in the “Putin-is-mad” argument is that, if true, then millions of Russians are mad, too, because millions of Russians share Putin’s views. In his February 21 speech, Putin proved himself to be a terrible historian. But most people are terrible historians (and not only in Russia). Anyone who has lived in Russia has heard Putin’s ideas expressed by acquaintances and even close friends and family. My social media feed is peppered with similar voices—not bots, but friends of friends. Indeed, I have heard some of Putin’s ideas expressed by historians at the “liberal” Russian university where I worked for most of the past decade. True, it is difficult to measure Russians’ support for the invasion. And yes, it is difficult to say what Russians even understand by "invasion". But we should not discount the extent to which Putin’s views are shared by his compatriots.

The question is, how could Russians believe such things? Here, a history lesson is in order. Russia is settled on the world’s largest plain; with few natural barriers, the country has endured numerous invasions in its history. Memory of the most recent invasion — Nazi Germany’s in June 1941 — lies at the foundation of Putin’s state. Between 1941 and 1945, the Great Patriotic War — as the Second World War is called in Russia — took the lives of 27 million Soviet citizens. Today, many Russians are primed for a narrative of encirclement because of how their leaders have used memory of the war since 1945. In the postwar years, Soviet citizens commonly accepted stories in the state press about an aggressive West. These reports were quite convincing given the lack of alternative sources of information, and Soviet citizens’ recent catastrophic experience at the hands of a Western power.

The conventional interpretation states that the Soviet Union changed significantly under Mikhail Gorbachev in the late 1980s. And it did change — but not totally. In a classic article, the political scientist Donna Bahry argued that, under Gorbachev, popular support for reform was "in the aggregate" no different from under Stalin. According to Bahry, in launching his reforms of glasnost and perestroika Gorbachev staked his political fortunes on a different constituency — younger generations of professionals and intellectuals. In 1991, the Soviet Union collapsed; for many Russians, what followed was not freedom, but poverty, rampant crime, and the humiliation of a great power. In the early post-Soviet years, the pro-Western constituency suffered a serious setback.

Jump to contemporary Russia. Profoundly problematic ideas spread easily through societies that are structured by profoundly hierarchical institutions. For a moment, forget about Putin’s security council or his "inner circle". Take other Russian institutions — universities, state bureaucracies, and so on. Many of these institutions are extraordinarily hierarchical; their leaders are involved in the most minute matters of their governance, in part because of the strictures of Russian law. At the university where I worked, the university president was required to sign off personally on everyone’s vacations. Once I witnessed him walking around trying to find an office for a professor who, for some reason, did not have one. These kinds of practices do not necessarily undermine individual initiative; indeed, you have a right to appeal directly to the university president should you have a mundane issue. But they do limit the experience of horizontal organization — crucial for formulating cogent alternative ideas, to say nothing of successful opposition — since the lesson is, to solve your problems, petition the tsar.

Russian thinkers have often claimed that their country has a unique mission. Putin appears to consider himself a thinker, and has spoken of Russia’s special duty to save Ukraine, and maybe the world, from an immoral West. Let’s accept part of Putin’s claim: today’s Russia does have a mission. Yet the mission should be to save Ukraine, as well as Russia, from Putin himself.

When and how the conflict ends depends largely on Russia — indeed, on ordinary Russian citizens. Ukrainians have fought valiantly, but they face a formidable foe. The West can do only so much to help Ukraine, since escalation could lead to nuclear war. Russia’s oligarchs appear beholden to Putin  and his state. That leaves the Russian people.

Since the start of the invasion, thousands of Russian citizens have taken to the streets to protest the war. They have relied on alternative sources of information and have been shaped by other, more salutary threads of Russian history — as well as their own ideas and bravery. We can only wish them well. But we should be sober-minded, for nations rarely live up to their callings. And, in this regard, Russia is hardly alone.

This essay appeared first with the NYU Jordan Center Blog published on March 11.

Anatoly Pinsky, The War in Ukraine Is Not Only about Putin - It’s Also about Russia. (Reprint), in: Zeitgeschichte-online, März 2022, URL: https://zeitgeschichte-online.de/themen/war-ukraine-not-only-about-putin-its-also-about-russia