The Kitchen Maid That Will Rule The State

The Last Hundred Years of Women’s Emancipation in Russia 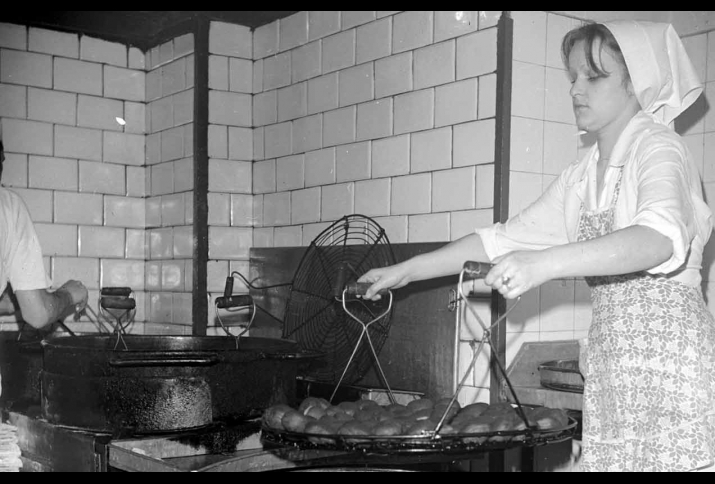 On October 18, 2017 Ksenia Sobchak, a Russian TV anchor, journalist and socialite, announced that she would be running for presidency. She claimed that since the “none of the above” option had been removed from the ballots, she would be representing rejection of all presidential candidates. Soback’s call to vote for her instead of boycotting the elections altogether sparked a heated debated among Russian liberals. Yet, it is not her political program (or, rather, the absence of it) but her gender that made Sobchak the focus of media and public attention.

Many commentators noted that Sobchak filmed her announcement in the kitchen. “Was that a Bolshevik suggestion that every kitchen maid can rule the state?” asked a publication in the Russia’s most popular daily Komsomol’skaia Pravda.[1] Whether or not a reference to the famous “Lenin’s quote” was indeed what Sobchak intended, the kitchen maid that aspires to run the state became a ubiquitous frame for media and popular commentary on her candidacy. The history of the evolving meaning of the ambitious kitchen maid serves as a window into the paradoxes of the Bolsheviks’ understanding of women’s emancipation and the way it affects discussions about gender relations in contemporary Russia.

In late September-early October of 1917, just several weeks before the party’s acquisition of power, Vladimir Lenin wrote his seminal article “Can the Bolsheviks Retain State Power?” Demanding inclusion of conscious workers and soldiers into the government after the February Revolution had overthrown the autocracy, Lenin wrote: “We are not utopians. We know that an unskilled laborer or a cook cannot immediately get on with the job of state administration.” Lenin’s statement contained a promise of future opportunities and growth for those oppressed by the tsarist state.

It appears that Lenin himself gave no more thought to the “kitchen maid” after the 1917 publication. It is in the light hand of the famous Soviet poet Vladimir Maiakovskii “Lenin’s kitchen maid” received a second life. Immediately after Lenin’s death, Vladimir Maiakovskii started working on an epic poem to commemorate the dead leader. After a series of readings to groups of workers and party leadership, the poem “Vladimir Iliuch Lenin” was published in 1925. Describing the inglorious flight of former nobility from the Soviet country, the narrator sarcastically exclaims: “Good riddance! We’ll train every cook so she might manage the country to the workers’ gain.” Just as Lenin did in his 1917 article, Maiakovskii uses the kitchen maid to stand for the most exploited, the most disenfranchised laborers of tsarist Russia that would replace the former elites in running the state once the Bolsheviks have taught them. 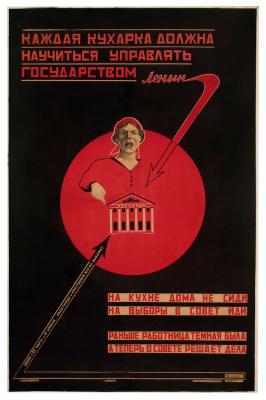 Kitchen maid’s transformation into a symbol of women’s emancipation was part of the greater propaganda campaign that portrayed Lenin as an advocate for women’s needs launched by Bolshevik women activists who were involved in the work of the party’s women’s section. These activists used the burgeoning Lenin’s cult to legitimize their work by portraying Lenin as having special interest in the “woman question.” His work was widely cited by advocates of party’s greater attention to the special needs of Soviet women as women. Thus, Lenin’s promise to educate every kitchen maid so that she could run the government rescued from the oblivion by Vladimir Maiakovskii turned into one of the most popular slogans of the early Soviet efforts to liberate women through political education and socialization of housework.

The Kitchen Maid under Stalin

The Stalin era witnessed a “conservative turn” in its policies towards women. Women were now to take full responsibility for raising children and maintaining households. Yet, the Soviet state continued to sound Lenin’s promise that a kitchen maid can participate in state governance.Perhaps its most famous representation in Stalinist culture is the seminal music comedy The Radiant Path (1940). 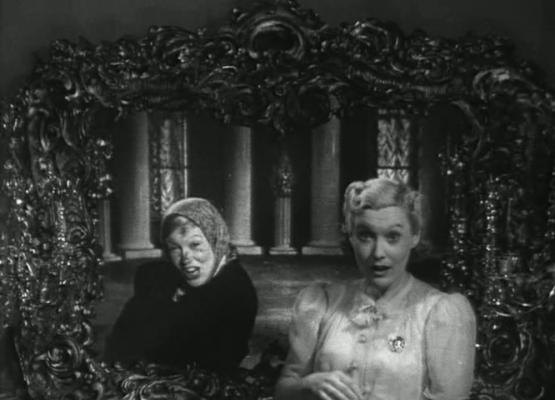 Film still from the 1940 movie The Radiant Path (Grigoriy Aleksandrov, 1940).

It told the story of an illiterate nanny Tania Morozova who eventually became a factory worker, a labor hero and a deputy of the Supreme Soviet.  The state was sending women contradictory messages. It encouraged them to be active in labor outside the home and public life while simultaneously emphasizing that their place was in the home.

The Kitchen Maid and the End of the Soviet System

The last years of the Soviet regime saw a critical engagement with “Lenin’s kitchen maid” within the context of the renewed discussion of women’s place in Soviet society as well as the debate about the Soviet system as a whole. Liberal intelligentsia, who came to dominate the political landscape, were vocal about the “mistake” of forcing women to leave their natural domestic sphere. The metaphor of Lenin’s kitchen maid gradually acquired the meaning it will continue to have in post-Soviet Russia: the Bolsheviks entrusted running the country to kitchen maids who were, in fact, unsuited for governance. Promotion of kitchen maids into politics also poses a threat to the stability of family life. The position can be summarized in the aphorism by Russian writer and media persona Viktor Shenderovich: “While they were teaching the kitchen maid to run the state, they ran out of food.”

The Kitchen Maid and Russian Feminism

While in the history of post-Soviet Russia there have been two female presidential candidates – in 2000 Ella Panfilova was the first women to run as a candidate in a Russian presidential election and in 2004 Irina Khakamada was the second woman who ran  in the Russian presidiental election. Both women were representing oppositional liberal parties at the time of their presidential bids – Ksenia Sobchak is the first woman to be running against the background of an unprecedented debate about feminism in Russian society. The fact that Lenin’s kitchen maid continues to be one of the main frames for commentators of Sobchak’s participation in the elections reminds us about the significance of the Soviet experience with women’s liberation for Russian people and the meanings they ascribe to the notion of gender equality today. For those who reject the communist past the kitchen maid stands for the Bolsheviks’ utopian vision of women’s ability to contribute to the society on par with men. Those, who are nostalgic for the Soviet times go back to the original Lenin’s quote and argue that in fact the founder of the Soviet state meant that the kitchen maid could not run it. Yet, there is a new generation of Russians who, critically engaging with the Soviet past, see it as an inspiration for the renewed struggle for gender equality. For them, the kitchen maids can and should run the state – even though the Ksenia Sobchak might not be the one to lead the way.