Celebrating the Spirit of the Elbe: From the 1950s Revival of Soviet-American Relations to the Reset of the 2010s 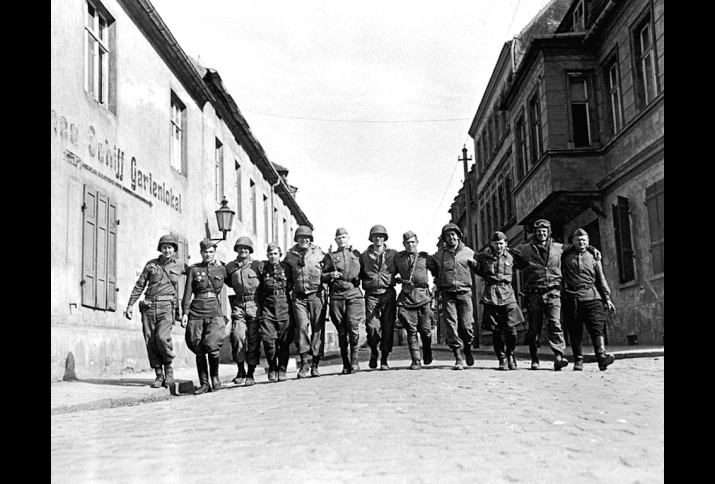 Early this year, the international media made much of the latest US National Defense Strategy which emphasized „great power competition“ as the primary focus of current US national security.[1] Directed against both Russia and China, representatives from both countries criticized the strategy and Russian Foreign Minister Sergei Lavrov regretted the US need to „prove their leadership through such confrontational strategies and concepts.“[2] We have been seeing an escalation in the discourse about a “new cold war” between the US and Russia for a while now, but this latest move from the Trump administration announced directly that its focus was no longer primarily on terrorism as the greatest threat to American interests, but competition and confrontation with China and Russia. However, ever since the beginning of the Cold War, the two superpowers have gone through periods where the shared experience of the Second World War has been the basis for reconciliation attempts.

On April 25, 1945, Soviet and American soldiers met on the banks of the river Elbe in Germany, signalling that the end of the Second World War was in sight. With the rise of the Cold War, Soviet authorities did not include the former American ally in their narrative of the Great Patriotic War, but veterans of the 1945 meeting on the Elbe remained sympathetic to each other for life, believing that someday “the spirit of brotherhood will truly prevail along the banks of the Elbe, Volga, Mississippi, and every other river on this our earth.”[3]

Soviet authorities were especially skeptical of veterans’ efforts to hold transnational reunions and jointly celebrate the meeting on the Elbe. Thus, when in 1955, the American Veterans of the Elbe Linkup invited Soviet comrades to celebrate April 25 with them in Washington, D.C., the Soviet side backed out at the last minute. Joseph Polowsky, the secretary of the American Veterans of the Elbe River Link-Up organization, claimed that Soviet authorities found it degrading to subject their citizens to fingerprinting, as was required of all entering aliens in the US, and therefore did not allow the veterans to travel.

With the Soviet withdrawal, however, came an invitation to celebrate in Moscow on May 9, the official Victory Day in the Soviet Union, and nine American veterans accepted the offer. It is tempting to attribute the choice of the May date over the April anniversary date solely to propaganda purposes, but practicality also mattered. The Soviet decision not to accept the American invitation came so late that an earlier visit would have been difficult to pull off.[4] The Soviet side seized the opportunity to display Soviet hospitality. During the four days in Moscow, the Elbe veterans met with more than 750 veterans of the Second World War, attended a reception held by Soviet Marshal Vasily Sokolovsky, and visited the Lenin-Stalin Mausoleum. They were also shepherded to a collective farm in the Krasnogorsky district, taken to museums, and theaters, and shown around the capital.[5]

Although pleased with the outcome of the reunion, the Soviet organizers suspected that three of the nine Americans were not really veterans of the Elbe linkup but had come to the Soviet Union “with ulterior motives.” They maintained that the three had showed a considerable interest in what they perceived as atypical or unflattering circumstances in the life of Soviet people. According to the Soviet hosts, the three suspects had vigilantly monitored the behavior of their own comrades and avoided all political statements as well as topics that revealed any unpleasant realities of American life. The Soviets claimed that the behavior of the other six, as witnessed in photos and conversations showed that they were real veterans of the April 25 meeting on the Elbe—two had even received the Soviet order of the Red Star. But the other three gave the impression of individuals sent to the Soviet Union as spies.[6]

Still, as of 1955, Soviet-American relations improved slowly and the wartime alliance played an important role here. Soviet delegates to the United States started reporting that Americans showed great respect for the suffering and the achievements of the Soviet people during the Second World War, emphasizing that Soviet propaganda, both foreign and domestic, could better utilize this feeling of empathy. And at the same time, Premier Khrushchev’s rhetoric about peaceful coexistence took on a very concrete meaning, in that he emphasized how the two superpowers had indeed shown that they were perfectly able to work together during the War.

In the years to come, Soviet and American veterans of the Elbe meeting held irregular reunions in both countries, Soviet veterans visited the US for the first time in 1958, and Soviet authorities celebrated the wartime alliance in several ways. This continued into post-Soviet times, For example with the issuing of a three ruble coin to commemorate the Meeting on the Elbe on the fiftieth anniversary of the end of the Great Patriotic War in 1995. On the sixtieth anniversary, a “Monument to the Anti-Hitlerite Coalition Countries” was erected in Victory Park in Moscow. Celebrating the full allied coalition and focusing on the soldiers, not the leaders, the monument shows a French soldier, a Soviet Red Army soldier, an American GI, and a British soldier. The French and the British soldiers are positioned behind the Soviet and the American soldiers, with the Soviet soldier slightly taller than the American. Also in 2005, Putin made an attempt to reconcile European and Russians views of the victory, which was seen as a significant gesture during a period of relative coldness.[7]

Then, the spring of 2010 saw a relaxation of Russian-American relations that was very similar to the 1950s revival of Soviet-American relations in that it also, in part, relied on the narrative of successful cooperation during the Second World War. In April 2010, Presidents Barack Obama and Dmitri Medvedev signed a nuclear proliferation treaty announcing the reduction of strategic nuclear missile launchers by half. In April and May, both presidents commemorated the sixty-fifth anniversary of the end of the Second World War. On April 25, they issued a joint announcement on Elbe Day, to commemorate the day Soviet and American soldiers met to split up the German army in 1945; and on May 9, Russian Victory Day, American soldiers participated for the first time in a Red Square military parade to celebrate the end of the Second World War in Europe. Finally, Medvedev visited the United States and the White House for two days in June 2010, mainly to celebrate what was being portrayed as the “resetting” of the Russian-American relationship after notable deterioration in the post-Cold War period.[8]

What President Obama labeled “resetting” of Russian-American relations in 2010, Moscow had called a “revival” of Soviet-American relations in 1955.[9] In both cases, however, the war alliance was used as a positive example of the two nations’ capabilities to work together toward a common goal. The Presidents’ statement on Elbe Day emphasized how the two countries could and should cooperate, or at least coexist, in a partnership. The soldiers who fought the war were celebrated, as was “the historic handshake at the Elbe,” and the “spirit of the Elbe”—or “dukh El’be”—once again entered official rhetoric on both sides of the Atlantic.

This recycling of terms from the Cold War, even if they apply to a very different context, reminds observers of the always ambivalent historical relationship between Russia and the United States. And ever since the fall of the Soviet Union, everytime Russian and American relations experience a setback, we hear about a „new Cold War.“ The Trans-Atlantic relationship is certainly very strained right now, and not since Obama and Medvedev, has there been such a mutual will to celebrate the Elbe meeting and the Soviet-American wartime alliance. As long as confrontation and competition is back on the agenda, it is difficult to imagine a new revival or reset of relations between the old – and “new” – Cold War enemies that is based on the wartime alliance.

Rósa Magnúsdóttir, Celebrating the Spirit of the Elbe: From the 1950s Revival of Soviet-American Relations to the Reset of the 2010s, in: Zeitgeschichte-online, März 2018, URL: https://zeitgeschichte-online.de/themen/celebrating-spirit-elbe-1950s-revival-soviet-american-relations-reset-2010s