Of Soviet Teddy Boys, Hippies and Resistance that Does Not Know its Name 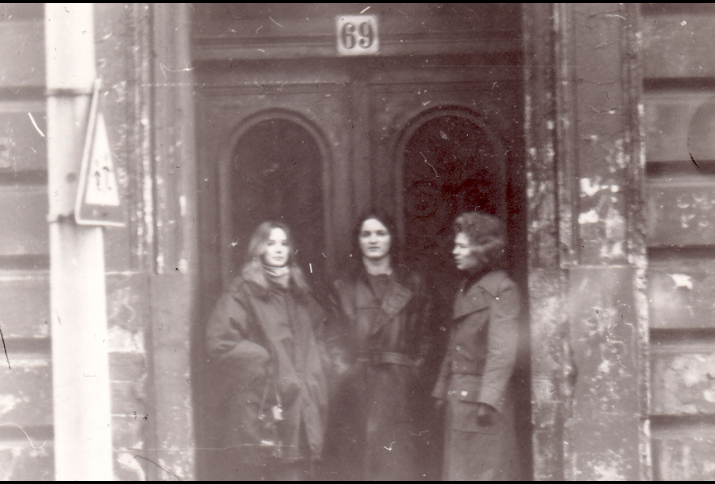 “If you think about it, the stiliagi were the first real dissidents” wrote Soviet Vasilii Aksenov, from the vantage point of American exile, in his quasi-memoir Melancholy Baby. Vasilii Aksenov was thinking back to his youthful days in the early 1950s, when the son of two Gulag inmates arrived in Moscow as a wide-eyed provincial lad from Kazan. He soon found himself in the company of so-called ‘golden youth’, dancing the boogie-woogie in the apartments of new friends whose KGB parents had furnished them with clothes and records from the West. They were so-called stiliagi – stylish and style-worshipping youngsters akin to the British teddy Boys. Aksenov can be forgiven that it took him time to arrive at his provocative conclusion to cast the stiliagi as actors of the opposition. Yet just as the British Teddy Boys represented a veiled, yet unmistakable challenge to the rules of a society based on strict class division by shamelessly appropriating the fancy attire of English upper-class gentlemen while roaming their working-class neighbourhoods and pursuing working-class pastimes, the Soviet stiliagi challenged fundamental Soviet beliefs about masculinity and culture. Their longish hair and excessive attention to exterior markers flew in the face of a value system that championed military manliness and submission of all pleasures for the purpose of societal betterment. In this sense the swing-loving, BBC-listening and extravagantly dressed young men around Aksenov were indeed dissidents.

In the early 1970s, the stiliagi’s ‘Broadway’ on Gorky Street had become the ‘strit’, their ’koktail chall’ had been replaced by the shop Russian Wine and the stiliagi had made room for hippies, who sported even longer hair, wore even more outlandish clothing and listened to rock rather than jazz. Hippies, too, did not consider themselves to be dissidents at the time. Indeed, former hippies are usually quite keen to establish distance between themselves and the political opposition whose fight they considered futile and indeed detrimental, since it engaged with the Soviet system which they studiously tried to purge from their personal lives. Soviet hippies were thus busy establishing a quasi-parallel world which they dubbed sistema and which fulfilled many of the functions Soviet society denied to them: sociability, information, mutual support and not least – fun. Soviet hippies created their own slang, their own concerts, their own forms of gatherings and even their own hippie-trail, which ran from Tallinn to Tashkent rather than from San Francisco to Kathmandu.

Twenty years later in the early 1990s, when the Soviet Union collapsed, one could clearly see in hindsight how these countercultural youngsters heralded the forthcoming changes and undermined support for the Soviet superstructure. They did not want a state, which told them how to dress or what music they could listen to or where they could assemble. While only a few thousand Soviet youngsters chose the hard path and committed themselves to an uncompromising hippie life, which included harassment and persecution by the police, forsaking anything resembling a proper career, and a life of relative poverty, many more sympathised with their yearning for social and cultural freedom. For them the Beatles held more meaning than Marx, and Lennon was closer to their heart than Lenin. Because the Soviet state proved inflexible and because, unlike their parents’ generation, they did not believe in reform, the only possible response they saw was avoidance and escape. Parallel to this they championed those who created a parallel Soviet world – a world in which being Soviet was reduced to a national marker rather than an ideological statement: Soviet rock bands like Mashina Vremeni, Aquarium and DDT; Soviet retreats far from the eyes of power such as Koktebel and Gurzuf in the Crimea or Gauia in Latvia; Soviet jokes and anecdotes; and so on. As it turned out, the world of the long-haired youngsters proved more durable than the world of the Soviet system. In the 1990s the non-conformist art scene, Russian rock music, alternative squats and communes, hippies, punks, and metalisty were all alive and kicking, while the Soviet Union was dead.

This simple fact does not, of course, make a definitive statement about the reasons for the collapse of communism. There is not one single factor that caused the downfall of the Soviet Union. Countercultural youth had no direct say in the events of 1991. Yet their role is not entirely coincidental. They drained the Soviet system of the ingredient every socialist society (and possible any society) relies on: popular participation. Unlike dissidents, stiliagi, hippies, punks and hip hoppers were never at the forefront of political demonstrations (even though some did organise demonstrations especially in the Perestroika period). They were far less active in publishing samizdat and less prominent in the Western press. Yet their stubborn refusal to fulfil official expectations for youth as the vanguard of socialist construction was certainly one of the factors that lead to the mobilisation campaigns of Perestroika and Glasnost – and ultimately to the abolition of the structures recalcitrant youngsters had learned to circumvent.

On Sunday, March 18th, 2018, an entirely predictable and almost uncontested Russian Presidential election will take place. Many people will mourn over the absence of a proper opposition, not only among the candidates, but also among the electorate. There is wide-spread agreement that Putin would win an election even if it was conducted with a freer press and a less arbitrary candidate selection process. It is indeed hard to see where the Russian opposition is, if one looks beyond some sections of the Moscow and St. Petersburg educated middle classes. Just as in the 1970s few Western reporters paid attention to the numerously much stronger hippie community, whilst concentrating instead on the handful of outspoken political dissidents like Sakharov and Solzhenitsyn, today’s world is also transfixed on the search for political figure heads. Yet it is in the name of art that the strongest statements against the Putin regime have been made. Pussy Riot, Petr Pavlenskii and the art group Voina have always been understood as artists being political, but rarely as the shrill embodiment of every-day resistance. Like hippies, the current crop of rebellious artists tends to use their own bodies and actions as canvases on which they portray their messages. From nailed scrotums to the pavement of Red Square to sex orgies in a state museum, their challenge is almost always enacted using the ‘self’ – the contested body and soul of the Russian citizen. In essence, however, these shocking and provocative actions are nothing but extension of everyday acts, in which people use their social ‘selves’ in ways that sidestep the demands of hegemonic power. It is by now an open secret that Putin’s citizens have the same reluctance to show up at political support rallies as Soviet citizens felt for going communist party assemblies. Mass participation is propped up by material incentives offered or simply decreed from above. While for some time Putin was the object of a youth (and women’s) cult, there is much evidence that youngsters have already turned their attention to other things – from year to year Putin finds it harder to sell himself as the radical daredevil he would like to be seen as. Last year Moscow saw a major unsanctioned demonstration by young people on the Day of the City, clearly sabotaging what was supposed to be a Soviet-style pageantry of joyfulness and kitsch. Putin’s policy of anti-Westerness is certainly having a great ideological resonance, but it does not stop people from travelling, studying and emigrating in droves to the very countries despised most in the currently dominant Russian narrative.  June 1st, the day Moscow hippies celebrate themselves, attracts thousands of young people who profess to believe in love and peace.

As Aksenov knew, hindsight is a wonderful thing. Only time will tell where opposition in today’s Russia is fomenting and to what effect. Like the stiliagi and hippies it is likely that those who will later look like the oppositional avant-garde do not consider themselves to be in opposition right now. They are probably busy building a life that is non-political and pushes boundaries that will only reveal themselves in later years. Soviet hippies did not challenge Marx and Lenin. They challenged the Soviet understanding of freedom and fun. Soviet stiliagi were not anti-Stalin, but they prioritised style over matter. It is only now, more than a quarter century after the demise of the Soviet Union, that we can see how deep these challenges went. They questioned the entire premise that an individuals’ self-betterment is ultimately measured by collective gain and that individual freedom and pleasure is secondary to collective power and achievement of something that has value beyond the individual. Yet today we can also see how many Soviet values remained unchallenged. These days, many former hippies (but not all) support Putin’s policies, especially the annexation of the Crimea and his firm stance vis-à-vis the West. Many stiliagi made a career in the Soviet system after they cut of their quiffs and Tarzan hair. Challenges to the status quo can come from many unexpected corners and have unexpected consequences – yet they also rarely conform entirely to expectation.

Juliane Fürst, Of Soviet Teddy Boys, Hippies and Resistance that Does Not Know its Name, in: Zeitgeschichte-online, März 2018, URL: https://zeitgeschichte-online.de/themen/soviet-teddy-boys-hippies-and-resistance-does-not-know-its-name